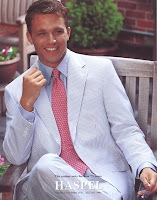 I don't know how you feel about seersucker, or if you are even actually acquainted with it.

For those of you who have not had the pleasure, I found an image on the Internet to give you some idea.

Personally, I kind of hate it. But I can't really tell if I hate how it looks or if I mostly hate it because I associate it with Carolina. And my college years just sucked so much ass.

And so things that take me back will often give me a visceral reaction. Not southern accents, fortunately, because Nick has one, and I find it charming. I don't seek them out, but I like his.

But things like seersucker, which as far as I can tell, is always worn with bucs. And I got bucs at college. Even though I loathed those fucking shoes. That's how hard I was trying to blend.

Seersucker is a summer fabric - thin cotton. It's striped, and woven in a particular way so as to make it pucker, which apparently means that it doesn't sit right on your skin, so it's cooler. I get why it's practical.

Nick has a seersucker suit. He wears it with white bucs. He hates being hot, and he loves this suit. And he really does look all clean-cut and handsome in it.

Incidentally, he is not a small man. He's 6'4" and has this gigantor frame. And the reason I bring this up is as follows. When he wears this suit? Let's just say that if you ever see an enormous wall of seersucker walking down the street, it's most likely my beloved.

And furtherly incidentally, have you ever seen Sophie's Choice?

If you've not, it's an extraordinary film.

Sophie, played my Meryl Streep, is a Polish woman who has survived the holocaust and has made it to America. In the present in the movie, she's living in a boarding house with Kevin Kline. Both actors are so young and gorgeous and incredible. And Streep does an amazing job with the accent. As always.

There's also this young southern writer living there - Stingo, the narrator. The three of them become friends, and they have a very intense friendship. And this young fella, he falls so in love with Sophie.

He's all freshly-scrubbed and sweet and earnest. And one day he's wearing a seersucker suit. He's a completely lovely, southern, seersucker suit wearing kind of guy.

She compliments him sincerely, in her near but not totally perfect English. On his cocksucker suit.

So as you may imagine, Nick, who enjoys the seersucker significantly more than I do, is beyond done with my compliments.
Posted by Lemon Gloria on Thursday, June 26, 2008