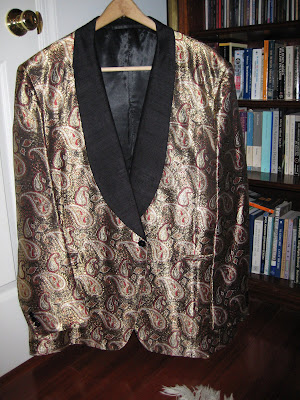 Lets say you have a fiancé named, oh, Nick. For example.

Let's also imagine that this hypothetical fiancé has a father who used to travel a lot for work. And in the 1970s, he went to India. Where he was given a bolt of paisley cloth, spun with actual gold thread.

Please remember the actual gold thread. Because it is used as a selling point.

As in, "But Lis! It's made with actual gold thread!"

But back to the matter at hypothetical hand.

Say this father took the cloth to a tailor, and had it made into a dinner jacket. Which then hung in his closet for 30-some years. Until his son announced he was getting married.

Try to imagine that at this point, aforementioned father decided to pull out the jacket and offer it to son Nick. And then imagine that Nick being delighted by the proffering of the jacket. He might even promptly run it over to a tailor to have it altered to fit him.

And then one day you might learn, in this hypothetical situation I'm spinning for you, that he would like to wear it.

Feel free to click on the picture for a very large version. And bear in mind that this fiancé you're hypotheticizing? Is ginormous, with big, broad shoulders.

And so this shiny gold jacket? Could be larger than your average 10-year old. The overall effect might be a little like King Midas's vault. On legs.

If this were actually the case in your life, would you lose your shit?

Email ThisBlogThis!Share to TwitterShare to FacebookShare to Pinterest
Labels: clothing and shoes, wedding