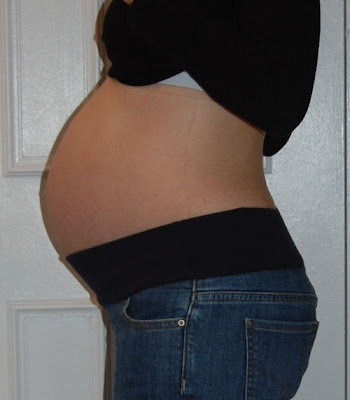 These jeans I am wearing?

Nick helped me pull them up this morning.

It turns out that the fast-growing head of cabbage in my uterus, while increasingly dancey and fun, makes all kinds of new things more difficult. Like putting on socks, and tying shoes, and just anything that involves bending over in general.

Even underwear has become a challenge. Because you have to hold onto something, and put one leg through, and then recalibrate yourself in space (I think of Alice, and in my head I say, "recalculating" in her voice), and then deal with the other leg and the up-pulling.

And so I sat down on the bed to put my feet through the legs of the jeans, but at some point had to stand up to actually pull them up.

Nick walked in and I was sort of huffing and puffing, all out of breath and struggling, with the waistband stuck halfway up my thighs. He started to laugh, and I peered up, bent over, both hands tightly clenching the thick elastic sides, and started to laugh as well.

Which put me in severe danger of falling over sideways.

And so he reached down, put both hands on the front elastic, and pulled.

I was going to look at this as a new low, but then a friend of mine pointed out that being so tall, Nick has better leverage.

Email ThisBlogThis!Share to TwitterShare to FacebookShare to Pinterest
Labels: clothing and shoes, the boy, the pregnant, tummy pics