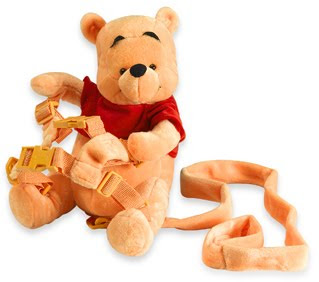 Yah, so, I'm pretty sure nobody really wants to be the person with their kid on a leash.

Uh-huh. It's your child, and he takes off like a firecracker and can you imagine losing your child? Or having him sprint into the street, into oncoming traffic? Flailing his arms and giggling maniacally?

What if he ditches you at the airport on your upcoming trip? He hates to hold hands when he's obligated to, and man, the kid is FAST.

A friend of mine said she lost her son at Dulles once. The airport police located him within 5 minutes. But 5 minutes? God knows who could snatch your kid and take off in those minutes.

I felt that drastic measures where called for. I ordered the leash.

Jordan loves Winnie the Pooh, but doesn't have one, so I ordered a Pooh bear (or Pohbuh, as he is known in our house) harness.

It's kind of adorable, really. If I were a Furry, I think I'd be a Pooh Bear one.

Although is that extra creepy? And have I told you about my friend whose dear friend dated the guy who was into the sex dressed as a furry, and was leading her in that direction, starting with threesomes?

She met him on the Internet.

She broke up with him before the furry sex business, though. Which, on the one hand, I can't blame her. But on the other, oh, the second-hand stories!

I pulled it out of the package and Jordan said, "OH! What's that? Pohbuh!"

So he carried Pohbuh around, and closed the little harness straps - so fascinating! just like on his stroller! openit! - and generally acted like they were fast pals.

He still does, in fact. I think it's a "love the sinner, hate the sin" situation. He and Pohbuh are friends, but keep that fucking tail thing far away.

So Nick took him out for the leash debut.

He said, "Look! Pooh Bear can ride on your back!" And he snapped him in. Jordan was all cool with it. Nick connected the leash part to the little loop without Jordan even noticing.

They walked up to the store, which is about a block and a half away. It was all going very smoothly, and Jordan was enjoying his freedom, toddling along. As they got to the big road, Jordan turned, saw that Dad was holding a long tail in one hand.

He was all, "Whaaat? The? Fuck?" (Incidentally, he didn't actually say that. He just looked it.)

And then, upon further inspection, he realized it was connected to him. EN. Raged.

Calamity! Much fit-having was had. Drama trauma and so forth.

How it's done Lisa my ass.

Anyway, now, on Thursday, we will be taking our airport trip. The first plane trip with the boy since he was two months old and an easy little eating sleeping lump on the plane.

We're heading up to Martha's Vineyard. I'm kind of nervous, and not just about the little plane from Boston to the Vineyard. Which, apparently, is small enough that you feel all the turbulence. I was told this by a friend assuring me that it was too low for Jordan's ears to pop.

I know it's not that long a trip, but you know, hours can be short, and hours can be long, depending on how they are spent.

And I anticipate many of them being spent trying to not lose the kid in the airports, trying to entertain the kid on the plane and keep people from hating us, trying to keep the kid from losing his shit because his naptime will be spent at Logan.

You know, I was about to say that maybe I should just rent a Pooh Bear costume and keep us all entertained, but when I think things like that I start to wonder if something really is wrong with me.

And I probably shouldn't say them out loud. But wouldn't it be worse to hold them in? Then they'd feel like secrets.

And who wants to have a Pooh Bear costume secret? Weird.

I guess what I'm saying is, if you could wish us luck all around, it would be much appreciated.
Posted by Lemon Gloria on Monday, May 23, 2011

Email ThisBlogThis!Share to TwitterShare to FacebookShare to Pinterest
Labels: the boy, there's something wrong with us, travel