Johnny rosin up your bow and play your fiddle hard 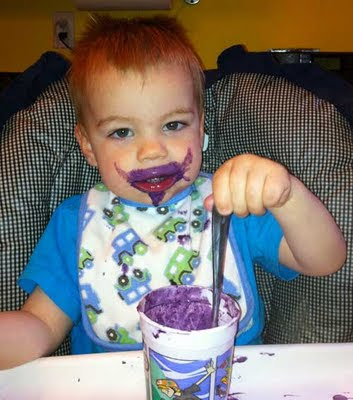 If you had walked up to me last weekend, and you’d pointed at my son and said, “Would you like me to take him off your hands?”

Assuming I’d been able to hear you over the indignant shrieks of the screaming little buttercup of my heart, light of my life, I’d have said, “YES! HERE! Oh, and here’s some cash! Buy yourself some ear plugs and liquor! Good luck! BYE!”

Because overnight, from Friday to Saturday, he’d transformed into a relatively sweet, charming little boy into a malevolent creature that shrieked, screamed, threw things, and generally made you want to run the other direction.

So, for example, when he wanted to read a book, but it was actually time to have breakfast, “Read book” transformed into “REEEEEEEEEEEEEEED BOOOOOOOOOOOOOOOOOOK!” Screamed at such a high pitch that I’m quite sure you could precision cut glass with it. It was this way with everything. Screaming. Crying. Kicking.

You might think I’d staged this picture, but no. This is my child drinking a blueberry smoothie. Or buebelly fooey, as he likes to call them. 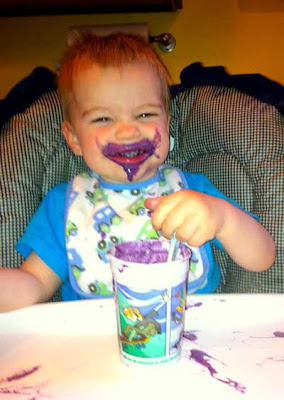 I’m pretty sure this is right before he poured the rest of it on his tray. My clue that he’d done so while I was turned to the sink was his exclamation of, “You dumped it!”

You Dumped It! is one of our favorite games. It’s up there with NO Brush Teeth!

That one made me so angry this weekend that I sat him on the bathroom floor and hissed, "You! SIT!"

It scared him. He sad.

Now, there were very sweet moments that then instantly made you forget the horror film that was your morning. And then minutes later, this tender little morsel of delight would turn into a fire-breathing dewdrop of evil.

He'd be so dreadful, and there were five million a couple times where I just had to walk out of the room. At which point he’d start crying and running towards me with outstretched arms. “Mama! Mama!”

As if I his world would crumble without me in it. So of course I walked back in, and picked him up. Knowing that it was just a matter of time before Beelzebub would appear.

Or I would piss him off and he’d reach out and say, “Daddyyyy! Buh bye Mama.”

It’s hard, you know, because with anyone else, you could just say, “You’re being an asshole. I’m going out.”

But when it’s your child, you can’t really go out without your asshole. Unless you take turns at asshole duty, which we did a bit of. But mostly we opted for family time. Strength in numbers and all.
Posted by Lemon Gloria on Tuesday, May 17, 2011