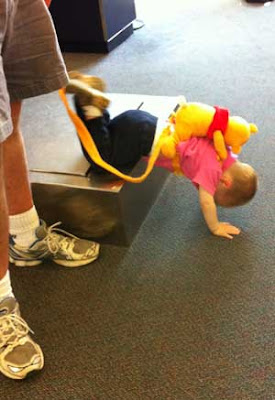 Being somewhere new is exciting. Traveling, however, it is stressful.

It shortens tempers and lengthens waiting times and just all around brings out the worst in people. It makes you ill-tempered and impatient and snappy. Or perhaps this is just me.

When you check in for the plane to Martha's Vineyard they weigh all of your bags and write the weights on tags on them. And then they ask you your weight. So they can organize the plane.

Nick gave a weight that I found improbably low, and I was all, "If you're lying and you fucking crash the plane and we all die just because you like to eat bacon and drink beer but don't want to own up to it, I'm going to fucking kill you."

Jordan was actually great on the planes and in the airports. With the exception of the itty bitty 9-passenger plane in which Nick and I were separated and I had to give them ALL my luggage including my entire bag of tricks so they could stick them in the nose and the wing.

Seriously. They stick bags in the wing. It was that small.

Let me tell you, Go Dog Go lasted through one reading. The safety brochure - "Look! Airplanes! And here's how you buckle your seatbelt!" bought me another five minutes. And then the rest of the flight was spent trying to keep him from launching himself at the door with the enticing red handle. The prevention of which caused Very Much Screaming.

The good news was, those propellers were fucking loud. They half muffled his shrieks, so not everyone in the plane hated us.

But otherwise, very sweet and happy. Just so busy. Very very busy with the busy business of busy. He was fine with the leash, for the most part. And in fact, sometimes he just stuck next to us and held the leash in his own hand and chewed pensively on the end of it.

Which of course is so disgusting after it's been trailing on the airport floor and you know has totally been contaminated with plague and trench mouth and such.

Here's a picture of Jordan in the very friendly bar that had the beer. He's playing with his two favorite condimnents: SATUPAPA! 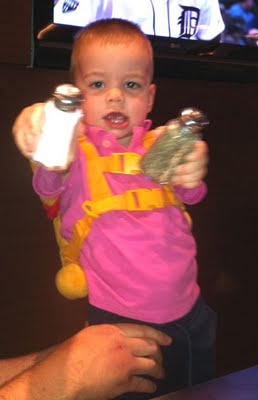 Which is all well and good and then you just tip extra for the large black and white satupapa pile you leave in the middle of the table.

On the whole, the trip was great, and Jordan handled it all really well. But you know, I've traveled a lot. I've traveled with good friends and complete strangers. I've had some difficulties and even some huge fights.

What I'd never had, till last weekend, was a trip with someone who so cheerfully and without malice worked against me the entire time.