The state of the hole and Hector big wood 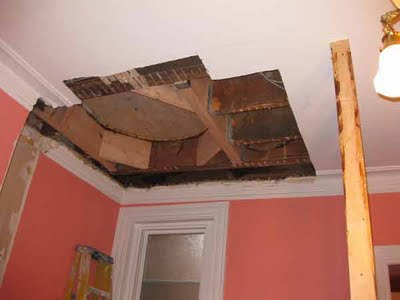 I thought I'd give you an update on the elevator. It's still going to be another six to eight weeks till it's in, they say.

Since it's a plastic tube and you choose from three set sizes, I assumed they could just call up the elevator store and be all, "Yeah, so we need three 12-foot long 37-inch tubes."

And then the elevator people would to go the 12-foot racks and take three off and stick them in a truck and there we'd go.

Australian Builder laughed very hard at the assumption. (Thankfully he was not around for the alarm conversation.)

Turns out you order them and it takes six weeks to make and a week to install. There's no sticking a tube between a floor and a ceiling, installing some buttons, and pressing Go!

So you may recognize this as the site of the former cat-pee hole. For which I now have an unopened and un-sent-back-to-Amazon bottle of Nature's Miracle for cat stuff.

I'm holding onto it until we've ripped all the necessary holes in all the relevant walls. And then, assuming we find no more cat pee to neutralize, I'm going to give it to someone with a cat pee problem (or rather, a cat-pee problem) - because if your cat has a pee-problem, I suggest the vet and possibly antibiotics, stat.

So before they cut the hole - which they did on every floor, perfect circles, all the way up (and covered with plywood so nobody falls through) - they built these walls to shore up the floor above while they were putting extra beams in. Nick assured me that even if they weren't properly supported, the floor would just slowly bow rather than falling directly on our heads.

But really, why not avoid that kind of thing if you can?

Also, it just occurs to me, are they walls if they have no sides? They're wall structures. I call them walls. Although I suppose they look more like prison?

I mean, if prison were plywood. Which would be so stupid because even if you didn't have a saw you could probably slowly gnaw your way out, you know?

Anyway, I quite like how the supporting wall/quarter-prison perfectly matches our child-proof gates. Don't you? 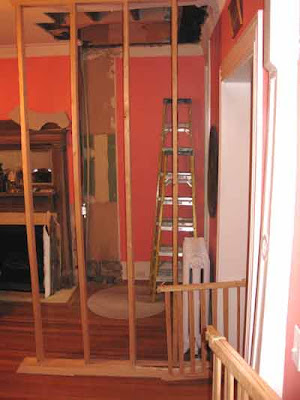 So, one of the construction guys is named Hector, and I believe he's the one who carried in the boards. I say this because when I got home one night Jordan pointed and announced, "Hector big wood!"

Every time we pass by the wall, he says, very matter-of-factly, "Hector big wood."

He likes to know you've heard him, so if you don't repeat it back or at least reply in the affirmative, then he keeps saying it. Overandoverandover until you make it clear that you heard him and you're in agreement.

These are how our conversations go.

"Yes, you're right. They're building a wall."

We say this like 50 times a day. I don't even know Hector's last name. But I'm pretty sure that he's always going to be Hector Bigwood to me.
Posted by Lemon Gloria on Wednesday, May 18, 2011