The state of the hole:
Seriously, look at this! And look how beautifully they curved the wall and did the molding! 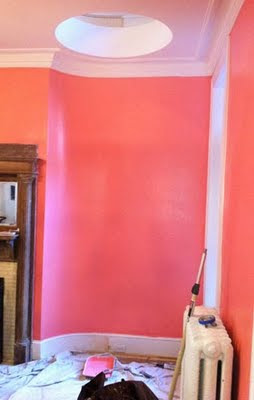 Still unclear when the actual elevator is going to arrive. But we've got some beautiful holes in the meantime.

Rat update:
Stacey said the rats ate the parsley as well. Those motherfuckers are shameless. Next they'll be asking for mints and turndown service.

Nick's giant electrifying trap has not yet arrived.

Speaking of elecrifying:
We have a bunch of electric green paint, and I have to figure out which room could appropriately be that particular color. It's a color I like. It's just, uh, complicated.

See, we have this kitchen that's painted yellow - I'm sure you've seen it in some of the photos or videos. And we have a room right behind it which shares a wall. It's kind of arbitrary where the kitchen ends and the back room begins.

It turns out that strong yellow lining up next to electric green makes you dizzy. And nauseous. You'd hit the edge of one and practically fall down.