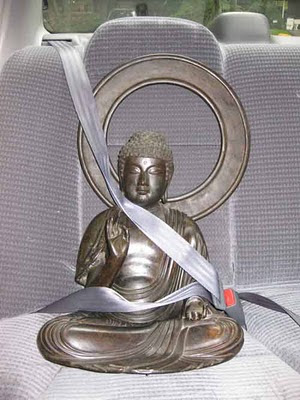 So Betty is almost almost moved in.

Or rather, I should say that Betty is almost almost completely out of her house.

I believe that the last of the stuff will be out and off to donation/junk yard/somewhere else on God's green earth besides our house in about an hour or so. When she calls and says that the haul away people have hauled the last bits away, I will breathe a huge sigh of relief.

I was going to say that this has been a Herculean task, although truthfully, for the longest time it felt like a Sisyphean one. In fact, it still does to some extent. And not to get all Greek goddy on you.

Oh, which reminds me. They moved all of Betty's furniture and statues in on Saturday, and at some point Nick looked around our dining room and said, "We cannot have Buddha central in here."

It wasn't exactly Buddha central. Because the enormous two-ton marble god on the stairs is actually Mahadev.

But they're all Buddha to Jordan and Nick. In fact, Jordan saw these huge pre-Columbian terra cotta statues in my mom's living room and said, "What are those Buddhas doing?"

I don't correct either of them.

This move, this move that is thank the sweet Lord above almost over has really stretched us thin emotionally.

Nick tends to get really stressed out when his physical environment is chaotic. And our house is now not only loaded up with too much furniture, but it's also piled high with boxes. It's a huge house, and it is bursting at the seams at this point.

Which is to say chaotic.

And when Nick gets stressed out, he can get dickish. And when he gets dickish I tend to get all shrill and hatey. Although I have not been lying in bed dividing up the furniture. Mainly because at this point, that imaginary task would make me cry.

The good thing is, we recognize where we are, and where we need to go. We ALL need to get rid of stuff. Betty has brought waaaaay too much stuff over. I've taken waaaaay too much from her house because things have such sentimental value to me.

And Nick, Nick has held onto things that he is now realizing do not matter in the grand scheme of things.

It's like a friend of ours said: It's hard to be sentimental when you're drowning in your own stuff.

Need any stuff? You know where to find me.

Email ThisBlogThis!Share to TwitterShare to FacebookShare to Pinterest
Labels: marriage, the Betty, the boy