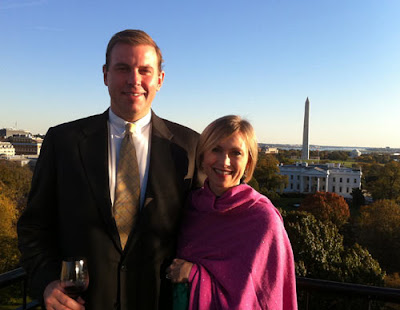 1. We went to a delightful wedding at the Hay-Adams this weekend. It was beautiful and elegant, and after 10 years in DC, I realized I'd never had a view like this. Amazing, no?

Even the oh-so-important-they-take-away-your-chairs W doesn't have this.

I'd only been to the Hay-Adams twice. and both times to the downstairs bar, Off the Record. Once for a happy hour, once for a first date just over a month before I met Nick. And I really quite liked the guy, who never asked me out again.

Lucky all around, it turns out.

2. We watched The Social Network on Friday. It made me want to quit Facebook.

3. I have had this terrible plague cold that Jordan brought home from daycare for almost two weeks now. I hear it's going around. I'm really fucking sick of being sick.

4. I was thinking the other day that now that Sarah Palin isn't fake campaigning for president, she's really not getting any attention. So I realized that she should probably drop in on the Kardashians.

I don't know what their politics are, and it's kind of hard to picture them interested in moose chili. But it would be great for Sarah. I mean, they're better at getting attention than anyone, don't you think?

5. We saw a guy dressed in a giant green bodysuit about 9:30 on Sunday morning. He looked ridiculous. He was hurrying.

And Nick said, "When I was in college we called that the Walk of Shame. He's just now going home."

And I was all, "Those don't look like pajamas. Maybe he's out exercising?"

"Lisa. That was his Halloween costume."

You guys. I have completely turned into my mother.
Posted by Lemon Gloria on Monday, October 31, 2011