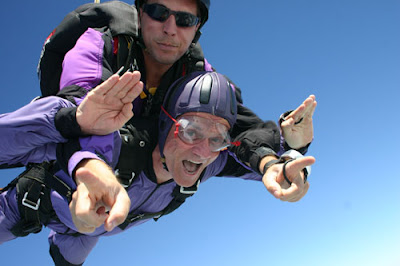 Today is my dad's birthday.

I have to say, in April I was pretty certain we'd lost him. And even in May, things were iffy. I feel very lucky to still have him in my world.

Two birthdays ago my brother and I gave him a gift certificate for a sky dive. He'd been in the Air Force years ago but never gotten to jump out of a plane. And he'd always wanted to.

And then almost two years went by, and his health wasn't great, and he just didn't feel up to it.

Now, about a year ago, my dad's brother Jack had come to town. He re-met a childhood friend of theirs named Donna, who lives just down the road in VA. Jack's wife had passed away two years ago, as had Donna's husband. And so, after, I don't know, 50+ years of not seeing each other, they re-met and fell in love. And now, in their 70's, they're together.

In case you're wondering why I've suddenly introduced Jack and Donna, here's why. Well, one, I think it's a happy, you just never know kind of story. But two, Donna? Lovely, tiny little Donna? Loves to jump out of planes. She loves the sky diving.

So she told my dad that if he was up for it, she'd jump too. Which I think was nice for him, because Betty is more of a hell no these feet aren't leaving the ground kind of person. And Jack has no interest in it either.

And so a couple weeks ago my dad, Betty, Donna, and Jack headed out to the sky dive place. Aren't they a cute little group?

Betty called me on the drive out, and I told her to tell dad to buy the video, if it was an option. It was. And I watched it recently.

Before they get into the plane they do a little interview with the people who are going to jump. And so, off camera, you hear a voice asking my dad questions. The camera is aimed straight at my dad's face.

The guy asked why he was doing this. My dad said it was a birthday present, that he'd always wanted to jump out of a plane.

The guy asked a few more standard questions and got very typical responses.

And then he asked, "Are you nervous?"

My dad answered, "Not at all."

"You know what they say about people who aren't nervous about sky diving?"

The guy laughed. "That they're just plain crazy."

And my dad smiled at the man, looked straight into the camera, his eyes glinting, and he said, "Oh, I'm crazy all right."

"Heh heh." Cameraman unsure of what to say. But no disagreement from the ground.

So happy birthday, Pop! I'm glad you're still with us, still having adventures. I hope you're around for many more.