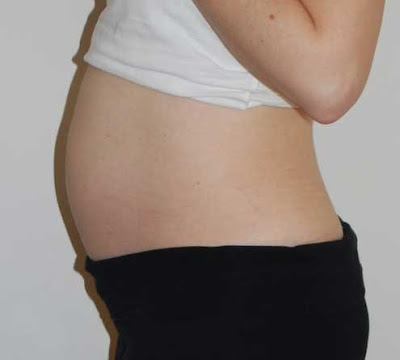 This week, the little dude is an heirloom tomato. He now supposedly weighs over half a pound.

AND! I've felt him thumping around in there a couple times! Like, out of the blue I felt this little push. And then it happened again!

So then I waited, and when nothing happened after that, I mooshed my stomach to try to get him to do something. Poke, poke. To no avail.

I suppose it's tantamount to bugging caged animals. Unfair. But he's got a lot of padding in his babyhouse, you know?

Speaking of confinements, I do feel kind of bad for the little guy. Because look at this 19 week image from babycenter.com. 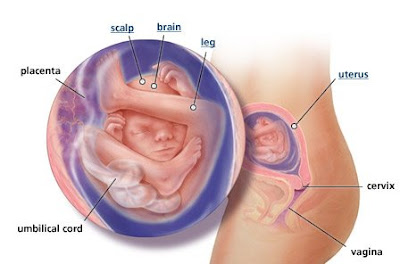 Look how scrinched up he is! And it's only going to get worse.

And something they said this week that I think is kind of gross. "A waxy protective coating called the vernix caseosa is forming on her skin to prevent it from pickling in the amniotic fluid."

Prevent it from pickling!

I've been thinking about how the kid has to live in liquid for nearly ten months. Picturing a little person, floating around in what looked like viscous, yellow fluid when they sucked it out of me during the amnio. I have vivid images of ascaris and baby pigs and such suspended in jars in my science classroom in high school.

When I first started thinking about this a couple weeks ago, Nick said that actually, babies have this protective layer of skin on them that peels off after a couple days. I did not believe him.

What he was talking about was the vernix mentioned above.

But I misunderstood. And not having spent any concerted time around a newborn, in my mind, I totally pictured a moulting reptile. I used to be fascinated by how lizards and snakes could just shimmy out of their old casing and leave it behind.

But it was a bit much for me to believe that two or three days in, we'd reach into the crib to pick up the little dude, only to find he'd moulted.

And if you have any interest in seeing moulting in action, here you go.

Email ThisBlogThis!Share to TwitterShare to FacebookShare to Pinterest
Labels: the baby chase, the pregnant, tummy pics