But I was totally wearing long sleeves 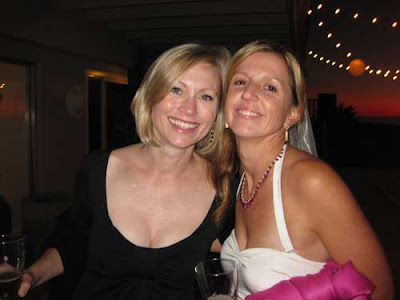 Many, many people saw my boobs over the four-day trip.

And actually, it's not really showing your boobs as much as showing your nipples, is it? You can have as much cleavage as you want, I think, as long as your nips are covered.

So anyway. For starters, I took everyone's advice and nursed during takeoff and landing and it worked perfectly - no crying. In fact, I nursed for most of both flights. When he wasn't sleeping, he was eating. So I was constantly whipping out one boob or the other.

Actually, I can't limit this to the flights. It started at the gate at Dulles and continued in practically every single venue until we landed back home.

I nursed in the airports. On the planes. In the living room of the place we stayed. On the balcony. In other people's rooms. Out for brunch.

The only places I didn't nurse were the cabs (he was strapped in a car seat) and seated at the actual wedding ceremony, although I'm sure Jane wouldn't have minded.

Initially I was self-conscious in public, but as Maude said, people would rather see your boob than hear a baby scream. And I realized that really, I'd already voluntarily shown my boobs to most of San Diego when I lived there.

Plus I feel like we grew up pretty casual about things like body parts and bodily functions and such.

Jane, who was in my wedding, wore a very short, very boob-revealing dress. She looked great in it. But I believe she recruited one of my friends to help her make sure her boobs stayed tucked in throughout the evening.

Maude's mom was so scandalized she still mentions the dress every once in a while.

And so, when I walked in to Jane's room with Jordan, where she had amassed all her girlfriends to hang out while getting ready, she took him out of my arms, took a look at my chest, and yelled, "Lis! Your boobs are HUGE!"

Not how I would've introduced myself to a room of strangers, but what can you do.

I looked down at my milk jugs. "I know!"

She turned to a woman next to me and said, "Because in normal life, she doesn't have any."

I turned to the woman, introduced myself, shrugged, and said, "It's true."
Posted by Lemon Gloria on Wednesday, November 04, 2009