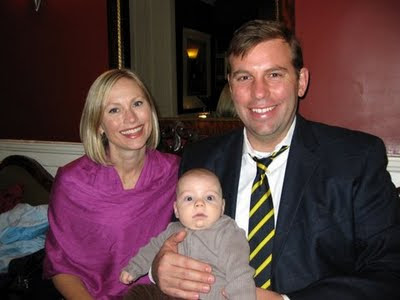 We were hoping to sit on the same couch as when we met, but this time, with Jordan.

The lovely couchy fireplace room, however, was packed.

I was so disappointed as we retreated to the lobby to figure out where else to go. And then Nick asked the woman at reception if we could have drinks on one of the couches out there. He explained about the anniversary.

It turned out to be a perfect place to sit. Excellent for people-watching, which provided Big J with a ton of entertainment.

And we kind of sat there all elbowing each other going, "We're married! To each other! And we have a kid! Can you believe it?!"

This picture was taken by a very attractive, well dressed woman sitting on a neighboring couch. She even made raspberries to get Jordan to smile, but nothing doing.

While we were chatting with her about the pictures, Nick asked if she was waiting for a blind date. , She was. Nick told her about our meeting two years prior, and our annual return for our anniversary.

"In fact," he said, motioning to Jordan, "our son might've been conceived last year on this very night!"

(Note: I'm quite sure he wasn't. And, really Nick? Announcing that we came here for our anniversary and then totally went home and DID IT?)

Nick turned back to the woman. "And last year, we met a woman who was waiting for her date. He stood her up."

I could've kicked him. I quickly added, "You're not being stood up."

She said she might be - it had been almost 20 minutes. Didn't we think that was long enough?

Nick said traffic had been horrendous, and to give him 30.

I voiced my own annoyance: "How hard would it be for him to call or text?"

Seriously. On a first date? My experience with late to a first date guys was that they were either disorganized, lazy, arrogant, and/or extraordinarily self-absorbed.

And then, in walked this tall, broad shouldered, good looking guy. He had on jeans, a t-shirt, and a black leather jacket. Casual but very attractive.

He spied our new couch friend, and introduced himself. No apology for tardiness.

I immediately assumed arrogance. I bet he gets away with a lot with his looks.

Nick told him he'd made it there in just under the time window.

He then apologized. And his excuse? He had been outside on a phone call. So he couldn't call to say he'd be late.

I wanted to be all, "Really? That's your excuse? Asshole."

But it wasn't my place, and she just smiled. And they headed in to the bar.
Posted by Lemon Gloria on Tuesday, November 17, 2009

Email ThisBlogThis!Share to TwitterShare to FacebookShare to Pinterest
Labels: love and happiness, marriage, the boy