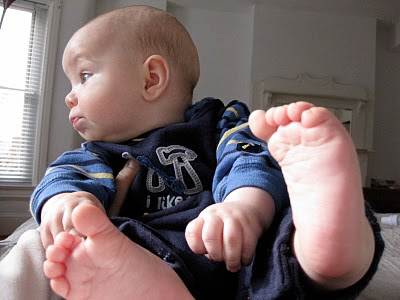 I don't know how you feel about feet.

I mean, I have some friends who are completely grossed out by feet. Not only other people's, but their own. They never go barefoot. You can torture them by acting like you're going to touch them with your toes.

I'm not like that. But I wouldn't say I'm a feet person.

And although I did consider foot prostitution as a fall-back career, I am not a foot fondler, or a toe sucker. No matter how much I love someone, no matter how freshly cleaned his feet.

So, yes, I'd be willing to stick my toe in someone's anus for large amounts of cash. (in an alternate single universe - not currently, honey). But whatever, it's my toe. Which is not to say I want someone else's toes anywhere near my private bits.

So we're clear on the feet thing.

But I love love love the big fat solid bricks that Jordan has for feet. I find them endlessly entertaining.

I hold them and squoosh them and nibble on them and do raspberries against the bottom of them.

Not having known any other babies really up close, though, I just assumed that all baby feet were like his - about as fat up and down as they are wide.

But the other day I decided to try some shoes on him. Those really soft, cute Robeez baby shoes.

The first pair, I couldn't get anywhere near getting on. The bigger pair, which were too long, I finally finally squoze his feet into. After lots and lots of effort. And giggling.

So that night, when Nick got home, I asked him the following: Are his feet thick top to bottom? Like, thicker than average?

Which I will admit is a random first question when you walk in the door.

I'm pretty sure he thought this was going to lead to an assault on his eating habits - because while I have never made a correlation between consumption of saturated fat and thickness of feet, it's not outside the realm of something I might come up with. And so he got into a defensive, "you are not fucking greeting me with the terrible diet bullshit as I walk in the door" stance.

And then you could see it click for him. He smiled. "Oooh, yeah. The Boy has my feet."
Posted by Lemon Gloria on Friday, January 22, 2010