Old MacJordan had a truck, E-I-E-I-O 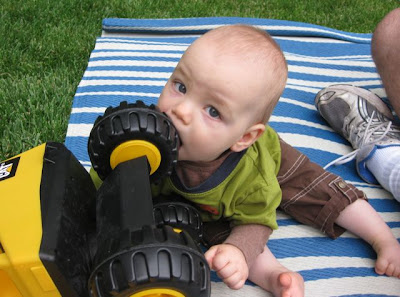 One of the things that Nick discovered calms Big J down when he is flipping out - particularly on the changing table - is Happy Birthday.

Old MacDonald works equally well, and at least there's some variation. We were bringing him home past his bedtime last weekend and he was really screamy and cranky in the back seat.

And so we sang Old Fucking MacDonald. Allll the way home from Springfield. Which took, I dunno, somewhere near forever.

You go through all the animals you know. And then you start reaching. We took turns.

At which Nick pointed out that we could actually recycle animals. It's not like J would know.