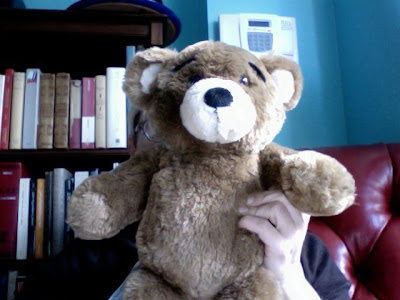 This is Bear. Beah! Beah! Beeeeaaaaah!

Also, just over his shoulder you can see our fabulous alarm system. The one that alerts the alarm company, rather than being linked to a model of our house down at the police station.

To be very honest, all stuffed animals are currently Bear. But two of them actually are bears. And the donkey, the penguin, and the not-quite-sure-what-it-is-so-I-call-him-Blue don't seem to mind.

This one is Jordan's favorite Bear.

I made Bear at a free Build-a-Bear station in the convention hall of the conference I went to in August. Steve, my conference husband, also has a son and he was all YES LISA GET IN LINE WE WANT FREE BEARS.

He was all about stocking up on free shit. The bears turned out to be awesome.

So we stood in a long, long line and when it was my turn I was handed a bear. A very limp bear. With thread hanging off his back.

I was weighing whether to ask if I'd gotten a defective bear or to suck it up, because, free! when I realized that they start out half-stuffed. Part of the process is having them stuff your bear.

So they ram the bear onto a pipe attached to what looks like a huge concession popcorn stand. The stuffing fluffs around in this machine and shoots straight into the back of your bear.

It's kind of a violent-looking process, actually.

So while it's being stuffed, they have you pick a heart out of a bucket, ask you who the bear is for, and tell you to think of your son and make a wish for him and kiss the heart. Which they ultimately stick in the bear and then pull the threads and close him up.

In retrospect, I wish I'd said, "Me. I have a thing for bears." and made it all awkward.

However, I said, "Jordan, my son." And then got all teared up.

But back to the heart. Before closing up your bear, they have you do a bunch of stupid shit like touch it to your forehead with it so he's smart, touch your elbow so he's flexible, touch your knee so he needs you...

And I should've known then and there that I was sliding into a bad place.

Because I did all of this very sincerely. The forehead, the elbow, the knee, whatever other ridiculous shit they asked me to do. I was all, "I'm going to make him the Best Bear Ever!"

Whereas Steve was all rolling his eyes and muttering, "Oh Jesus Christ could they just give us the fucking free bear already?"

It wasn't until we were dressing our bears in the promotional shirts and sunglasses and guitars - seriously - and I turned to Steve and said, "What did you name yours?" that he was all, "Who ARE you and what have you done with Lisa?"
Posted by Lemon Gloria on Friday, November 05, 2010