And to all a good night 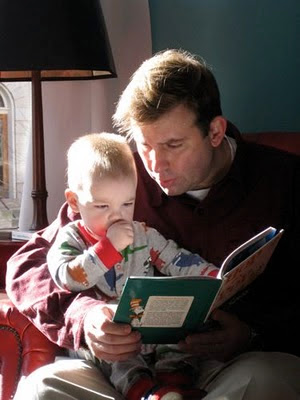 It's been a bit up and downy around here.

And now, after a week of various illnesses we find ourselves at Christmas Eve.

The stomach yuck got passed on to Betty, and Jordan got a 103 fever and little cold, but too fast to blame on the sister, and anyway, maybe he's teething? How do you know till you see teeth? And so he hasn't been his usual perkylicious self.

Also, because he hasn't been feeling well, he's been waking up crying at 3 am the last several nights.

Which is never the ideal time to be dredged up from the depths of your dreams, pulled to the chilly surface of awakeness and get-up-and-dealness.

But you know, you love your kid, and you get up and deal.

So last night I was the one who got up, and I realized the Motrin was downstairs. So I hurried down and back up. By the time I got to his room, he was no longer crying, but he was making noise, so I went in.

And there he was, running back and forth the length of his crib in delight.

He sleeps in a fleece sleep sack, which static electricity seems to love. And so every step was a crackle and a burst of sparkly light.

It was like magic. I felt lucky to see it.

There are so many negatives in the world, and quite honestly, I dwell on them more than I want to. There is so much ugliness and cruelty. But there's also so much beauty and good.

I think if there is magic in this world, it's going to be brought out by little boys and girls, up to mischief in the middle of the night. And I quite love that idea.

If you like this sort of thing, I hope some sparkly magic finds you this season.

And if you celebrate it, Merry Christmas and hugs. If you don't, hugs and a glorious weekend.
Posted by Lemon Gloria on Friday, December 24, 2010

Email ThisBlogThis!Share to TwitterShare to FacebookShare to Pinterest
Labels: love and happiness, sleep or lack thereof, the boy