Right here, right now, there is no other place I want to be 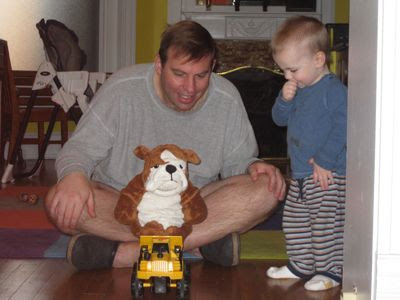 I thought about doing a wrap-up of the year, and even of the decade - as this marks 10 years that I've been back in DC, and actually, the longest I've lived anywhere, ever.

But reminiscing can make me melancholy. And the end of a year, a decade, can pull out the reflective and the sad, as you tiptoe through your accomplishments, failures, gains and losses.

So I'd rather share a little of today's joy with you, and wish you some of your own.

On Christmas eve, we went to our dear family friends' house, as we do every year.

They gave Jordan the Best Truck Ever. It goes forwards and backwards and the voice of a redneck guy even says "Woo hoo!" and "Back 'er up!" He loves it.

So when Nick paired Doggy with Best Truck Ever, it was like crack. The best thing Jordan had ever seen! He was then compelled to repeat it approximately 57 kabillion times. And when he stopped to go take a shower, there was much dismay. Temporary calamity in the Jordan world!

Until he realized that Mama could probably help with the Doggy Truck situation.

My decade is ending gently, and I am thankful. In the last ten years I've learned, I've grown, I've become stronger and kinder.

Wishing you a very happy New Year's Eve, and a wonderful start to 2011. And also your very own version of the Doggy Best Truck Ever combo.