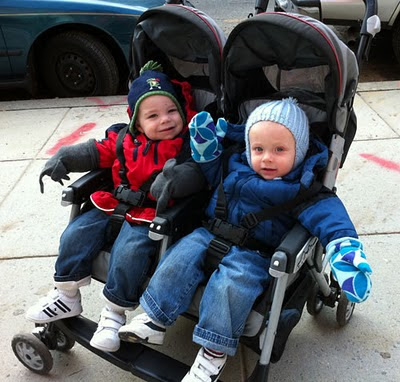 This is Jordan and his little friend David all dressed up and ready for the park.

J is wearing one of the very few pairs of shoes I could find into which I was able to stuff his little loaves of feet. His feet are about as thick top to bottom as they are side to side. I've never seen anything like it.

Note the use of their respective mother's mittens and gloves. Neither of them seemed to mind.

They're about the same age, and they have such a good time together. They squeal when they see each other. They chase each other around.

J's a little bigger and definitely pushier. David is pretty laid back, although not always. Sometimes or quite often, J will walk up and take what he wants out of David's hands; thus inciting his little friend to bat him on the head.

More likely, however, is that D picks up his chosen toy and scurries off to put it in a safe place. Although when you can't reach more than two feet off the ground, no place is really safe from your competition, it turns out.

Jordan, however, has recently learned to say the word "share" - pronounced as "shah."

I was so delighted when he started using it. Share! He gets the concept of sharing!

Ahem. Shahing in his world goes one direction only.

He'll walk over to you, point to the toy/cookie/sharp object you're holding, and say, "shah!"

Although I suppose this is more polite than "miiiine!" - don't you think?
Posted by Lemon Gloria on Monday, December 06, 2010