Up to your old tricks in Chapters Four, Five and Six 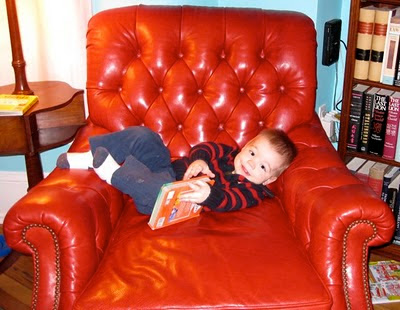 I don't know if these are related - are shy kids more likely to retreat into a book? - but I preferred reading to just about anything. I don't read as much as I'd like now, but well written fiction is still one of my greatest pleasures.

Nick, on the other hand, was not a reader. He hated it. He reads a lot now - although not as much for pleasure as he'd like. But he was well through school before he liked reading.

So our Big J, who is not remotely shy, loves the books. Loves being read to. I don't know if this means he'll love reading when he's older. But he loves it when we do.

He's started crawling into Nick's chair with a book, acting all grown up. In this picture, he's holding a book I loathe - one about Eeyore losing his tail.

I never realized it when I was a kid, but Eeyore is clearly clinically depressed. He's such a fucking downer. It just makes me want to stab him and pull out all his stuffing.

Now, having been depressed myself, I know he can't help it, and really, some therapy and Zoloft would probably turn things right around for him. He might actually be fun. So I do try to be understanding.

But he irritates the crap out of me.

Anyway. It turns out that the Borders on 18th and L is closing and everything is on sale. It's near my doctor's office, so after my appointment I stopped in to look at their 20% off children's books.

I'd forgotten how much I'd adored the characters of my childhood. Babar, the charming elephant, who it turns out is a colonial oppressor. Who knew? Not us, living in, uh, India and Bangladesh...We still have all those Babar books. I'm excited for J to get a little older.

I looked for Bartholomew and the Oobleck and If I Ran the Circus - two of my childhood Seuss favorites - but didn't find them. Although truthfully, now that I've looked them up on Amazon, I see they're cheaper there. Which I suppose is part of the Amazonification of the world.

I did buy Madeline, because I loved those books, and I don't think they survived my childhood and all our moves. I hesitated, because she's a girl...but then I thought, am I really only going to read him books with boys as main characters? No.

I also got him Richard Scarry's Mother Goose, because J really enjoys those nursery rhymes, and Richard Scarry has such amazing illustrations.

There were so many books I wanted to get, but stopped myself, because I realized they were more for me than for him. Like, I want to sit down and read all the Ramona books. Sit here for the present! And A Wrinkle in Time. Oh, CharlesWallace!

What I realized while browsing was that I'm so excited to get into books with richer plots. Not that I don't love The Very Hungry Caterpillar, but there are only so many times you can read it and still maintain the enthusiasm for him becoming...wait for it...a beautiful butterfly!

I'm itching to see Eloise get up to no good at the Plaza, although truthfully, I fear she'll give Jordan ideas.

Do you have childhood favorites you'd be happy to curl up with now?
Posted by Lemon Gloria on Friday, February 25, 2011