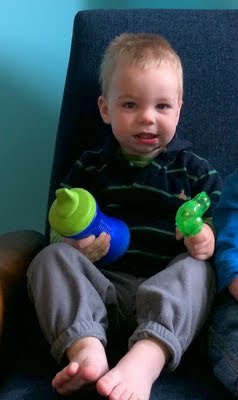 "What's that?" Jordan probably says this 734 times a day.

He always makes it sound like it's something he's never seen before in his life and the most exciting thing ever.

Except sometimes you know he's faking it when you see what he's pointing at and you're all, "You know very well that it's cake, my friend."

But he loves new things, and it's so cool to see someone starting from scratch, you know? The whole world is new and exciting. And we live in an urban neighborhood, and so just walking around the block is an adventure.

Nick took him to Home Depot last weekend. Jordan learned forklift. Except he calls it "forklips."

He came home very excited about the forklips.

And sometimes you realize you're making things more complicated than they are. Like when he pointed to a picture of a man with bagpipes on a plastic cup that we have.

Because of Jordan, I've learned what a backhoe is. It's one of those enormous yellow machines with a big scooper thingy attached. You see them all over town wherever they're digging up the roads replacing pipes and bringing traffic to a standstill. Who knew?

He points out all kinds of machinery as we walk by, and sometimes he'll identify them - "Backhoe! Digger! Scooper!" The truth is, I have no idea, so I'm all, "Yes! A good digger!"

There are lots of construction machines I do not know. So when he asks, I just say, "Big machine!"

And sometimes he will ask me the name of something I have no idea how to name. Like that plastic piece that your water sits on when you're getting water out of the fridge.

Nick calls this unhelpful. But I'm telling you, if Jordan ever asks for the plastic thingy, I'll know what he's talking about.