In which Nick wins by playing the Genghis Khan card 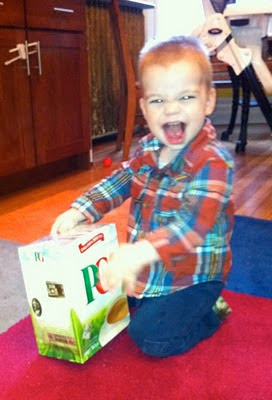 I just feel like coffee is a much manlier beverage than tea.

And I had to include this photo so you could see the size of the box of tea I ordered. In fact, I ordered two of them from Amazon, delivered to my office. I had to carry them home one at a time.

Somehow I didn't realize that 240 tea bags would mean a shitload of tea. It always seems like a good idea at the time.

So Nick, who is not only very tall but has these gigantor dinosaur-sized bones, could never by any stretch of the imagination be considered remotely effeminate. You could totally picture him as a lumberjack.

He's kind of like Chedo Lino with an office job and nice suits. And without the facial hair.

And one day I happened to mention to him that I just think coffee is manlier. It was probably during one of those moments when he was steeping his disgusting foot tea.

"Tea," I announced, "is more of a girly beverage. Coffee, on the other hand, is all strong and dark and manly."

I offered this a a statement of fact.

(I don't know where I come up with this shit either, truth be told. I hadn't thought of it before it came out of my mouth. But once you pick a position, you kind of have to stick to it, no?)

The fact that I prefer tea over coffee - unless of course I'm in France or Spain or Italy, which I pretty much never am - has nothing to do with anything. I'm almost a vegetarian, and yet I like men to eat meat.

I didn't say it made sense.

Nick was having none of it. He held out the Brits - his people - who had conquered the world drinking tea. The sun never setting on the British Empire and so on. Fueled by tea!

That was an easy one.

I said, "Think of the Romans! They drink coffee! Tiny little super strong shots of espresso. They're all super manly."

Nick sneered. He's not as enamored of the Italians as I.

His eyes lit up. "Genghis Khan! Ha! He and his marauding hordes all drank tea." He looked very pleased with himself.

Genghis Khan. Crap. You can't really argue with Genghis Khan. So I granted him and his horde of Mongols the manly tea-drinkers exception.