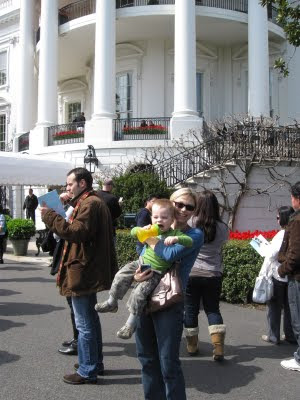 On Sunday Jordan and I walked down to the White House and then the Mall with our friends who are moving away.

Here you can see us screaming indignantly because we are having to hold still for 13 seconds.

Our friends had tickets for the garden tour. They're trying to get in the kinds of touristy things that you don't do when you live somewhere. So we went with them in the hopes of getting last-minute tickets, which we did. They are free and it's a very nice experience.

If you don't have a toddler. Or you have a cooperative one.

I learned two things on this tour: 1. The White House and its grounds are a hell of a lot bigger than they seem from outside the fence. 2. The best thing about taking my toddler on a garden tour is absolutely nothing.

Here he is plotting his route to the fountain: 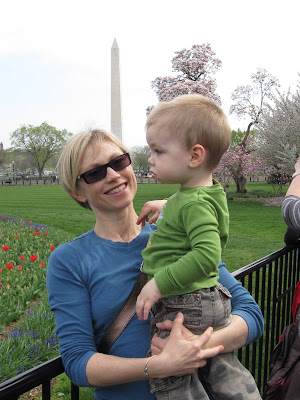 I spent the bulk of our time sprinting after Jordan, who was determined to get off the beaten path (and by beaten I mean paved and/or fenced and where you are ALLOWED to go) and into the roped-off grass and such. At one point, when I thought he was all impressed with the fountain, I just barely grabbed his shirt and stopped him as he tried to slip under the fence.

He had his own agenda, and when stopped, his preferred response was to say, "No!" and lay down on the ground in protest.

You could see how this might be Unhelpful in a moving crowd.

A number of people remarked on how I certainly have my hands full! Smile!

In fact, I would say this photo sums up our afternoon.

Email ThisBlogThis!Share to TwitterShare to FacebookShare to Pinterest
Labels: friends, the boy