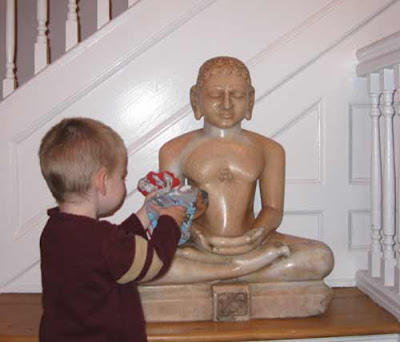 So I was totally wrong and he doesn't weigh two tons and his name isn't Mahadev. His name is actually Mahavira, and he is an incredibly important Jain deity.

Also, Nick says he probably weighs about 400 pounds. In any case. He's too heavy for me to lift.

Be that as it may, Jordan still calls him Buddha, and I don't correct him.

Growing up, I was very used to offerings to the gods. I mean, they weren't our gods, but they weren't not. I can't remember living in a house that didn't include statues of deities. And while we weren't leaving daily food or flowers for them, we might if we went to a temple. When we were in Thailand, we would always buy flowers to put outside the spirit houses.

I like this idea. It's very hard to imagine leaving a bowl of milk at the feet of Jesus, though, isn't it?

Anyway, the other night I brought home a bag of clothes my friend Michele had given me. Her son had grown out of them. 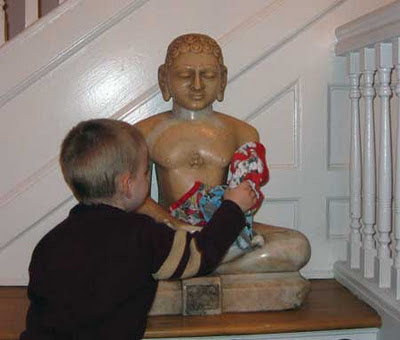 Jordan peered into the bag, saw some Thomas the Train underwear, and was enchanted.

This is now what he says when he sees something new. Email ThisBlogThis!Share to TwitterShare to FacebookShare to Pinterest
Labels: clothing and shoes, love and happiness, the boy