I am just about over Edward Cullen 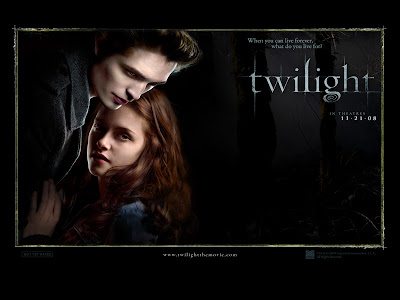 Even if he does sparkle like a million rainbows in the sunshine, which I kind of love.

As you know, I was thoroughly and deeply invested in the teenage vampire angst. I loved Edward and his repeatedly-adjectivized alabaster skin and topaz eyes. I loved how in love he and Bella were.

I mean, they still are. I just finished book three.

But the truth is, somewhere in the third book, I found myself rooting for Jacob. I got all, oh, Edward is just so fucking complicated.

I'm sick of his eternal internal struggle. I'm tired of his preoccupation with saving Bella's soul. I'm all kinds of weary of his insistence on marrying her right out of high school before he's willing to vampire her. And his struggle against the sex.

Whereas Jacob I find so refreshing. He's all sunshiney and positive and sweet and loving. And, and! He's 108 degrees! How deliciously warm would that be?

I haven't seen the movie, and so the characters in my head are still as I visualize them. And I now realize I'm imposing my own dating experience on the characters in these books, and that kind of mortifies me. But I cannot seem to figure out how not to.

Jacob, in my mind, he is this guy I briefly dated a couple years ago. Latino, whereas Jacob is Native American, but enormous, muscular, brown, and gorgeous. Super smart, and a really nice person. And man, hot. Just hot.

A sucky person for me to date, which I could blame on his ex-wife, or his unstable childhood. Both of which, of course, I would've thrown myself into making up for, because this was before I came to the realization that that strategy is pure stupid.

But I'm pretty sure that for his ex-wife, he was adoring and devoted and worshipful, in the same way Jacob is with Bella. He loved her so much. And his ex-wife, she made it very clear that she was settling when she married him, and eventually she cheated on him and divorced him.

So by the time we met, he was thoroughly untrusting (non-trusting? trustless?), and was doing a lot of playing and a lot of not-committing. Which just didn't work for me. But I still think he's a good person.

Come to think of it, he'd make an excellent werewolf, I'm quite sure.

Edward, on the other hand, Edward is all the enormously complicated, control freak, uptight men I have ever dated, but one in particular, rolled into one. I understand the magnetic pull. I get the visceral reaction and the body sparkles. I know the breathless red-hots can't-live-without feeling.

But still, I've begun to find him exhausting and slightly tedious.

I want to be like, "Oh, Bella, you'll grow up and you'll tire of this. I know it feels all urgent now, but you're 18, ferchrissakes. And, even if you don't get sick of him, you should at least sleep with Jacob once - at least once! - before you commit yourself forever and ever to this one man and a life of eternal vampiredom."

So clearly, I am still way too invested.
Posted by Lemon Gloria on Wednesday, January 28, 2009