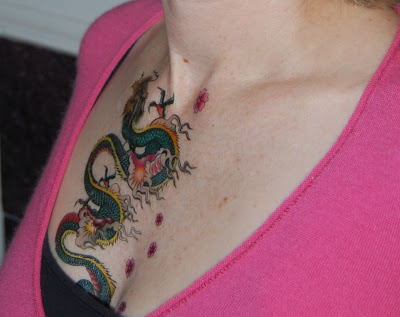 I will most likely never, ever get a tattoo, but I absolutely love temporary ones.

Although I must note that this picture was taken yesterday afternoon, and I'm still trying to scrub it off.

When faced with a choice, I will always pick the largest, sparkliest, most flamboyant. And I have to say, while a big dragon on my chest doesn't really fit my personality or my lifestyle, I kind of love it.

They agreed with Tori - my tarty boot enabler - in that my wardrobe doesn't actually seem to have changed, but if that's the story I want to sell...

But what I actually wanted to write about was something that surprised me and made me think.

I co-hosted a New Year's party with a group of friends. I've co-hosted this party a couple times before with some of the same people. The group shifts a bit year to year.

There's always an organizer's dinner beforehand. Nick had another event before the party, so Tori was my date.

Somewhere in the middle of things, someone responded to my complaint about being assigned to really late door duty with, "Well, yeah, but you have a husband."

And suddenly, after being single for so long, I felt aberrant.

After I got over that, though, I started thinking about how interesting this was, from a sociological perspective. Here was this room of incredibly smart, well-educated, attractive, interesting people. Most of whom live and work in DC - and have super-impressive jobs, for that matter - and all of whom are dating and presumably, would like to get married.

So is this, I wonder, pretty typical for urban populations at this point?