Listen, writing about this makes me feel less guilty about the spend spend spending. Which maybe makes this like a confession booth? 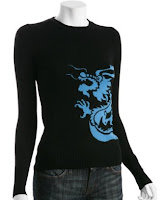 January has been a spendy month for me.

For that reason, and that reason alone, I bought two dresses - one black and bias-cut and one brown and empire waisted - at Proper Topper earlier this month. Both on sale and both expansion-friendly. But neither cheap.

But utterly necessary. You understand.

Right after starting to post about the preg, I went on an online maternity spree. I ordered, at the suggestion of several readers, a bunch of maternity stuff from Target. All of it was cheap, and cute, and comfy-looking. And I ordered enough to qualify for the $50 free shipping! So really, I was saving with quantity!

However, while it technically counts as already shipped, in that USPS has received the request, it has an expected delivery date of January 29-March 6. What the fuck are they doing with it in the meantime? And what kind of that is a time span for shipping in the same goddamn country?

Anyway. The next day, Betty and I headed over to TJ Maxx, one of my favorite places on this earth. I bought a ton of cutie cute little (not so little) empire-waisty things - all, alas, for when it gets warmer, except for a pair of super comf black yoga pants.

When it gets warmer, though, I am going to be all empire waisted and cute. I've decided. And spent.

And then, then I got a sale email from REI. I typed in "maternity" and they had a couple Prana pants and tops that looked cute. So I Googled, found them cheaper at a place called Altrec (the sportier among us may know it already; I didn't) and promptly ordered. They should arrive in a couple weeks.

And then then (thenly!?) the beautiful and fabulous Tori swooped into town for the inauguration. In the cutest sweater ev-ver - dark blue with a red Chinese dragon on the side. She'd just ordered it from Bluefly. I promptly jumped online. Even though we were at a party and I had to borrow Sam's computer. Sometimes shopping desperation is like that.

It just arrived. Black with a blue dragon. I can wear it for like, 15 more minutes. But I love it so. Maybe it will change my life in those 15 minutes?

Not only that, but strolling around the next day we both bought Obama shirts. Cute, screen-printed ones that say, "Obama. That's my DJ!"

But now, I just have to sit on my hands the next time temptation strikes. Except that I need a new pair of jeans. And bigger warm pants.

Maybe those will be my only February purchases. Please hold me to it.
Posted by Lemon Gloria on Friday, January 23, 2009

Email ThisBlogThis!Share to TwitterShare to FacebookShare to Pinterest
Labels: clothing and shoes, the pregnant