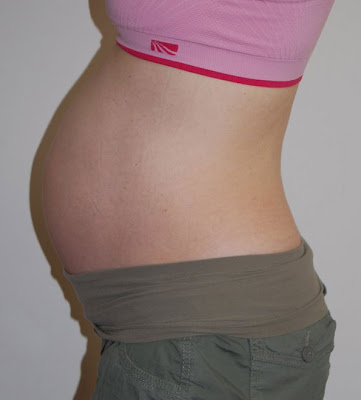 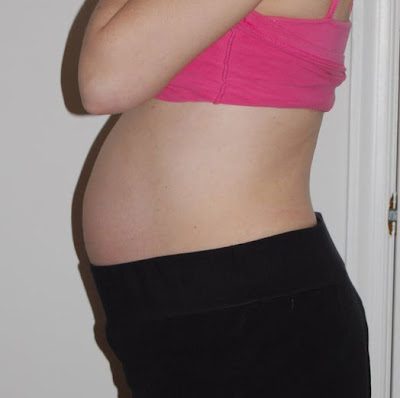 We took the Week 23 tummy pic I think last Friday night, just as we were getting ready to crawl in bed. I was almost too tired, but Nick thought documentation was important, and would just take a second.

And I'm glad to have it - there's a marked difference between this week and last.

But ugh - those are the warmest maternity pants I have, the ones that I have been wearing almost every single day. And at this point, after what feels like 731 wearings, I hate them. And do I really wear them that high?

This past week, even though I think they said Week 24 is an ear of corn, he feels significantly bigger and heavier. His kicks are stronger. He moves more often, and it's more visible from the outside.

On the downside, I am firmly in pregnant woman waddle territory. I've been told by several women. Which is always what you want to hear to feel more attractive.

And I think my running days may have come to an end. My hips get sore when I do. My stomach feels so heavy, like one of those medicine balls in the gym.

Worst of all, though, he regularly pokes me somewhere hurty.

Sometimes it's low on the right side, where I think maybe my appendix is? I try to squoosh him over, to no avail.

And sometimes - and this is truly horrendous - I get a sharp poke in the hoo-ha. From inside, I mean. Owie owie fuck ow.

Which is probably something I shouldn't even admit to you all. It's just that I forget what I'm talking about when it feels like I'm being stabbed with a sharp little knife on the inside. Straight down into my hoo-ha.

You could see how this might pull the bad language out of you.

And it's all kinds of worse when I run. So the waddling days, they have begun.

It's sunshiney and careening towards 80s for the weekend, which makes all kinds of things better!
Posted by Lemon Gloria on Friday, April 24, 2009

Email ThisBlogThis!Share to TwitterShare to FacebookShare to Pinterest
Labels: the pregnant, tummy pics