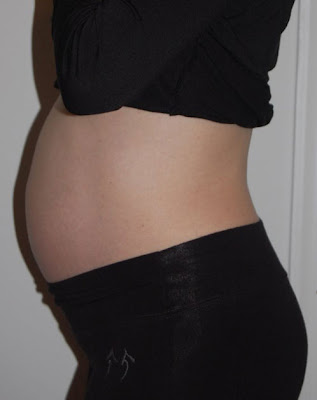 I just realized I look armless in this picture.

Ah, well. I've been wearing the toe shoes enough that I'm marginally more dexterous with my tootsies, although I still wouldn't be able to cook bacon and eggs with my feet or anything.

This week the little dude is either the size of a small doll - stupid, unhelpful description - or a spaghetti squash. Nick, who grew up being fed boiled meat and potatoes, was all, "What the fuck is spaghetti squash?"

But anyway. He's 10 or more inches long and weighs about a pound, and now he's thumping around a lot. I love it.

My Twilight colleagues have been referring to him alternately as the Little Nudger and Renesmee (ignoring gender naming conventions). For the non-Twilighters among us, this refers to Bella's half-monster baby - affectionately termed before she started inadvertently crashing around and killing her from the inside, of course.

It's a really interesting thing, the thumps and actually being able to feel the person you've got inside you. I think it's akin to carrying one of those itty bitty toy dogs around all the time. You're never alone. It's nice.
Posted by Lemon Gloria on Friday, April 10, 2009

Email ThisBlogThis!Share to TwitterShare to FacebookShare to Pinterest
Labels: the pregnant, tummy pics