What if I had been born fifty years before you in a house on a street where you lived? 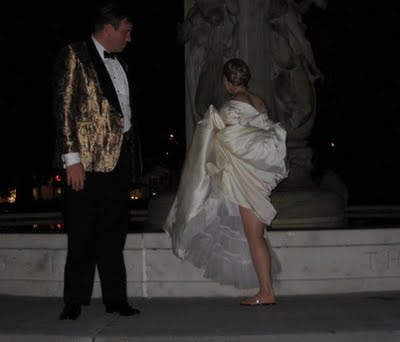 Two years ago tonight, luck slid, in sly silver rivulets, under my door.

It had been so long, I didn't recognize it immediately.

I arrived in a hurry, warm and um, glowing, five minutes late. Nick was already there, seated on a couch, beer in hand.

I entered pulling off hat and scarf, smoothing hair, scanning the room. He saw me first, and began standing, just as my sweep fell on him. I started at couch height, and then tilted my head up and up as he stood.

I've told this story before.

But what I don't think I've explained is that I almost closed the curtain on my luck as it pitter pattered on my window panes.

Because, you see, I canceled our first first date, which was to be several days prior.

It was dark and chilly and rainy and I felt like I was coming down with a cold. It was a grim night for a first date.

And really, I thought, if he doesn't bore the tar out of me, I'm going to loathe him. He won't be as cute as his pictures. He'll be humorless in person. Or I'll hate his teeth. Or his voice. Or we'll scrape for conversation, turning, in desperation, to reptiles.

Or, best and worst case scenario, I'll really really like him, which means he'll be irreparably damaged, and wind up hurting me whether he means to or not.

And once again, that will be that.

Really, those seemed the only options.

But we rescheduled, and on another rainy night, I headed out for my last first date.

I saw him and he stood and smiled and held out his hand. And I smiled back, and put my hand in his.

And with that small motion, I unlocked the door and threw it wide for my luck to pour in.
Posted by Lemon Gloria on Friday, November 13, 2009