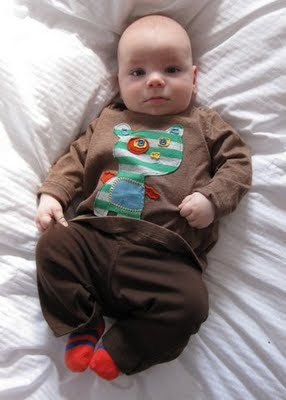 I don't know if you've ever been with a man who gets belly button lint?

I blame it on the size of his belly, but Nick contends every man gets it. I don't know.

What I do know is that it's completely astounding. It's like he walks around with his own personal Charybdis.

I bring this up because of the following. Prior to examining my son's little hands and feet, the man belly button lint was the only experience I'd ever had with weird accumulation of body lint.

You see Big J's clenched little fists? He clenches his toes as well.

And it turns out that when you keep your hands and toes all tightly clenched, you accumulate crud in them. And now that he sticks his hands in his mouth, his hand crud is wet crud. He keeps his hands clenched in the bath as well.

Prying them open is very difficult, particularly when you are only using one hand. I only get some of it. Clearly I have not yet learned to laser beam them out. Plus I realized the instructions also indicate you should be teaching your kid the "pull my finger" trick.

It's all too much to manage at once.

So mainly I clean his hand crud while he nurses. He doesn't appreciate it, but he's torn, so torn. Boob? Defend the hand? Boob? Hand?

It makes us a very simian little scenario, I know.

His toe lint, though, is kind of fascinating. It correlates perfectly with the color of his socks that day.

Happy weekend, all!
Posted by Lemon Gloria on Friday, December 04, 2009

Email ThisBlogThis!Share to TwitterShare to FacebookShare to Pinterest
Labels: the boy, there's something wrong with us