Preparation for the Iditarod. Plus, the kindness of strangers. 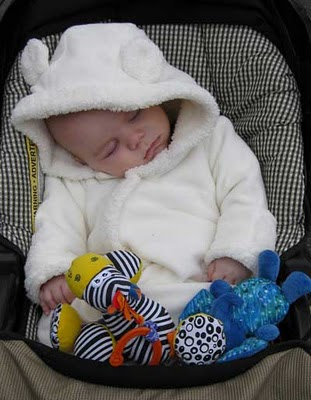 Which went really well. And confirmed that he is ginormous.

My office was closed due to snow. Which was lucky, because Betty was snowed in at her house. And Jordan can't yet fix himself lunch.

It took us forevvvvver to get to the appointment.

Quite frankly, I generally hate snow, in the same way that I hate all inclement weather. I try to keep it to myself, because everyone is always, oh, so beautiful! Lalalala! Snowmen! Unicorns! Happiness!

The only way I like snow is when I can look at it through the windows. And can poke my nose outside, enjoy it for a few moments, and then come back in and get all toasty.

So yesterday. My car was firmly stuck in a snow bank. So I hauled my big boy in his stroller a mile and a half over way too many unshoveled sidewalks.

I don't know if you have any idea how hard it is to get a stroller down iced-over sidewalks and through half-frozen half-slushy piles of snow.

The answer is: Very.

I wound up pulling the stroller much of the way, rather than pushing. Also, when the sidewalk was pure ice, it slid and I slid and it was all very terrible.

It was incredibly bumpy, and initially Jordan had this alarmed look on his face, and at a couple points he was trying unsuccessfully to hold on for dear life. If only he had more arm and hand control! If only!

But then remarkably enough, he just went ahead and went to sleep, despite my string of profanity, despite the occasional perilous angling of the stroller.

So, on the bright side, this experience was such a good reminder that people are kind.

At least 10 different people helped me when I was stuck trying to get over a particularly huge pile at a curb. I was incredibly grateful.

They were all men, except one.

This surprised me, if only because I would assume women would be more sympathetic.

At one point, I was struggling to get over a big snow hump and cross a street, and just at the crest of the snow pile, a woman stopped me to ask me for directions to the metro.

I was thinking, seriously, me? The woman gasping for breath, hair in face, tugging a load of baby on pointless wheels through a mound of snow? Are you fucking kidding me?

So, huffing and puffing and pulling and sweating, I pointed her and her male companion in the right direction, while breathlessly giving them instructions.

She thanked me and turned to go. At which point the guy she was with asked if I needed help, took the other end of the stroller, and helped me carry it across the street.

I could've kissed him. I kind of wanted to, just to be spiteful. But then I remembered I'm married and that kind of thing is Not OK.

So instead I beamed at him, thanked him profusely, and trundled off to the next Curb of Death, stroller firmly in hand.
Posted by Lemon Gloria on Tuesday, December 22, 2009