You and me both, buddy 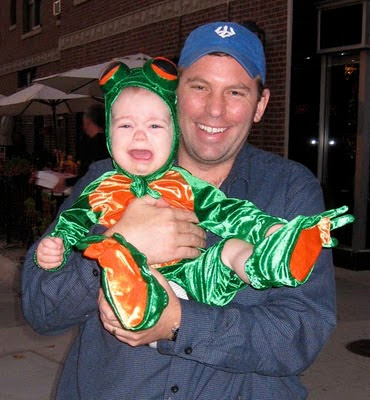 When you have a costume and a kid, even one too young for trick-or-treating, it's impossible to resist sticking one inside the other and heading out into the neighborhood.

He was fine with the costume, which I'd bought last year, even though by this point it was too short. But the feet, oh, the trauma of the feet.

He was all, "WHY ARE YOU MAKING ME WEAR THESE TERRIBLE FROG FEET?"

And I was all, "SO THAT IN 15 YEARS I CAN SHOW YOUR GIRLFRIENDS THE PICTURES."

Not really. Or maybe just kind of.

It was a not-stellar weekend for Jordan and me. He's been kind of needy and challenging and we'd been together just the two of us for too long in a row, and I was so over it. Nick was great, and spent a lot of time with J while I ate way too much Halloween candy and kind of hid.

J is at a point where he can say a bunch of things, which is great, but not everything, which is frustrating.

Yes, haha. So years-ago Snoop Dogg of me. Boy, am I going to mortify my son when he's a teenager.

But back to now. What I think he wants to say most is, "I want EVERYTHING my way! And whatever you're having, I want. NOW! And don't put me down! EVER!"

And saying, "I have to put you down because I can't make your dinner while holding you" doesn't exactly stop the shrieking.

Because he is still DOWN when he wants to be UP.

And me, I'm back to tired. I had a few good weeks where I was sure acupuncture was magic, and I was getting my energy back...and I'm back to pretty constant, flat-out exhaustion. And I'm so crabby. And impatient. And irritated.

Nick was kind of horrified when I said that it's too bad there aren't kid boarding places, kind of like how you can board your dog when you go out of town. Not that I would ever stick my kid in a kennel. Of course not. Even if they had them.

(And anyway, I was envisioning more of a kiddie hotel, really.)
Posted by Lemon Gloria on Monday, November 01, 2010

Email ThisBlogThis!Share to TwitterShare to FacebookShare to Pinterest
Labels: i'mamama, love and happiness, the boy, there's something wrong with us