In my defense, I practically have to stand on a ladder to see it 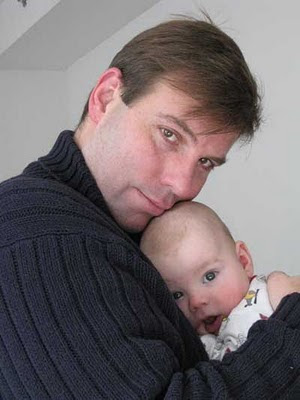 You get married to someone you are so incredibly close to, and as days pass, you only get closer.

You share secrets, intimate moments, every little thing you possibly can.

You spend hours - in the beginning, anyway - holding their face, gazing into their eyes, ruffling their hair, offering sweetnesses, drinking them in, and generally trying to get to know the person as deeply and thoroughly as possible.

Your relationship gets harder but richer when you have a kid. You can't imagine being closer to another human being.

So you know. It's not that I don't love him.

It's more, well, I've been told I'm lucky I haven't been kidnapped on the street, considering how unobservant I can be.

I have been telling people that I have no idea where Jordan's widow's peak comes from.

I thought it was pretty cool. Must be some ancestor from somewhere. Who knows? A mystery.

Until the time someone asked when Nick was standing right there.

He had a tone.

I thought about it, shook my head. "Not that I know of."

He gave me a look, and pulled back his bangs.