Because who doesn't hear "blizzard" and think "penis," really? 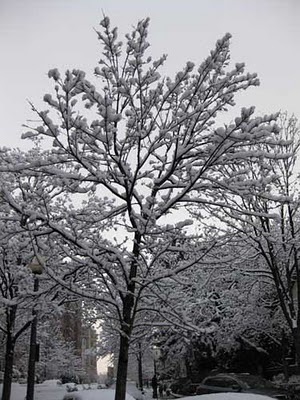 So if you know me, you know that I take any and all inclement weather completely personally.

And so now I am all, what is this blizzard bullshit snow and snow and snow? And, really, on the weekends, goddammit?

Because snow is kind of fun once. Ooh, snow! Fun pictures! Look at the pretty trees, all covered in white!

And then after that, if it doesn't shut down my office, I am over it.

Yes, it's lovely and magical and no two snowflakes are alike and blah blah blah. I know. Whatever.

So on Tuesday, Nick emailed to say they were predicting 6" of snow.

And I thought two things: 1. Excellent! This will surely shut down my office! And, 2. That's more snow than the average length of penis in the US!

The visual I had was of all these men prostrate in the snow, poking their penises in to see if they were longer than the snowstorm.

Anyway, if I had a penis, that's totally what I'd do.

I said this to Jenny. Who didn't know about my list of all the places I'd put my penis if I had one. So I told her about that as well. So she wouldn't think this was completely bizarre-o out of the blue.

So then she was all,"Yeah, but by Nick's age, the novelty would've worn off, so you probably wouldn't be all that interested in putting your penis in random places."

"Oh, well, if you could suddenly have a penis, that would be awesome! Don't you think?"

And I was about to agree until I realized it's the kind of awesome that would most likely lead to your husband divorcing you.

I haven't asked him. But don't you think?
Posted by Lemon Gloria on Thursday, February 04, 2010