We are widening the corridors, and adding more lanes... 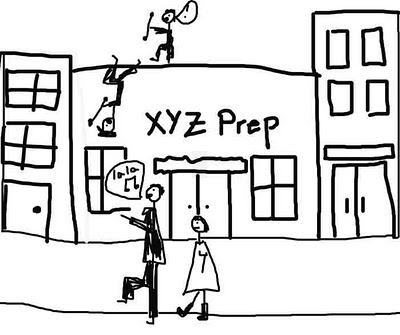 So as you know, Nick and I walk most of the way to work together.

On our route, it turns out there's this preparatory school that I'd passed a million times but never noticed.

I grew up in cities. But since Nick grew up in a bucolic setting, I think the idea of city schools, crammed in among offices and retail on city blocks and without any grass or playing fields, really intrigues him.

Nick saw the prep school sign one day, and that was that for him. That's where he went to high school.

For entertainment during daily commuting purposes, I mean.

He now has to sing the XYZ Prep song every time we pass it. Every. Time. Which is almost, oh, every morning.

He sings it to the tune of "Oh, Christmas Tree."

We commute during rush hour. There are always a number of people walking down the sidewalk with us.

In case you're wondering.

One day last week I was really in a hurry and was two steps ahead of him the whole way, so as we approached the building I was all, "Don't sing! You won't be able to keep pace!"

And he boomed, "On the contrary! I was in the XYZ Prep marching band! Singing our marching song only speeds me up! Oh, XYZ Prep, oh XYZ Prep..."

He began marching quickly. In a very knees up, arms out march-y way. While singing. Loudly.

He added, while pointing up, "We had to march back and forth on the roof, of course, since there wasn't much room for practice."

Two people we were passing looked up to where he was pointing.

"Did you ever lose batons over the side?"

"Batons! We lost people! You can get caught up in the marching, and forget where the edge is. Plus, the tether ball courts were up there. You have no idea how many tether ball fatalities we had."

He then resumed singing.

If you think there is any remote attempt at subtlety here, you're mistaken.

Also, I just realized I backwardsed us in the drawing. But I cannot bear to re-draw. Please just imagine me in front, trying to hurry him along. Instead of walking behind, looking slightly horrified.
Posted by Lemon Gloria on Tuesday, February 23, 2010