Nobody puts Baby in a closet 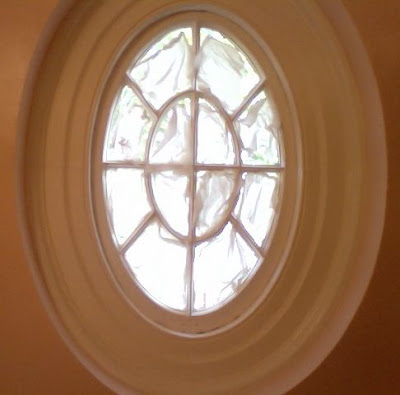 Also, obviously, this isn't a picture of a closet. It's a picture of the bathroom window. Covered in tissues, in case you can't tell.

Because who in heckfire has a window in the bathroom that you can't cover?

Every year Nick has a work retreat at a country club in Charlottesville. Last year my OB wouldn't let me go because I was too pregnant. And then this year we were all going to go and then we weren't and then we were and we weren't.

I won't bore you with the details but in the end we did and here we are.

And it's sunny, and Jordan loves the pool. And grilled cheese. And dill pickles. Boy does he love dill pickles.

And I have decided this: I live in quirky old-house odd windows blah blah blah charm. I don't need it on my "vacation." And vacation is in quotes because traveling with an angry "this isn't home and fuck you I'm not sleeping" almost-one-year-old doesn't exactly say Vacation! to me.

When we got down here at 11:30 last night, poor old J was so tired and discombobulated that he pretty much went to sleep. In the closet.

The closet that's almost as big as the bedroom in my old place.

But let me tell you, it's nap time now, in fact, it's past nap time, and he is FURIOUS. He's in his familiar Pack and Play. But he's pissed about not being in his own crib, in his own room.

PISSED. And Dad is in all-day meetings. Mama has to pay.

But back to the window. Last night, right about midnight, after we'd stuck the kid in the closet and I went in to take a shower, I realized that with the light on, God and everyone would be able to see me all nakey nakey. Which, of course, is how I prefer to shower.

So I asked Nick if he'd brought any nails along.

Although I guess God is always able to see you. But anyway.

He's all big and handy. He always carries a Leatherman.

Nick, I mean. I doubt God needs a Leatherman.

But there was this box of tissues. I started wetting them and sticking them up, in an effort to opacify our window. Although I guess they're more translucent than opaque, huh? I'm not so clear on which. No pun, seriously.

Anyway, that was last night, and they're still stuck in the same place.

I have to think Housekeeping was either WTF? or good idea! when they went through today.

We have the same damn window in the bedroom. I haven't tissued it, but tonight I am considering propping the ironing board up in front of it and mashing a pillow against it.

Is it trashy, the kid in the closet and tissue and ironing board with pillow on the windows?

And if it is, does trashy mean you can crack a beer before 3:30 on a Thursday afternoon?