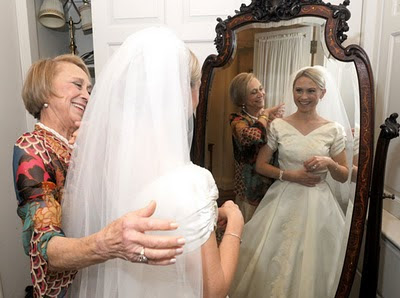 One of Nick's friends asked him how my high school reunion went.

He replied, "She had a great time. It was kind of like a wedding."

I don't know if you have ever donned a veil, but I did, just that once, and it felt like magic. When I was a kid, one Christmas my dad gave me a purple feather boa. I just felt better when I had it on. It was exactly like that.

I'd wear it every day if I could. Honestly.

(I'm adding the exclamation points; unlike me, Nick doesn't talk all exclamation-pointy.)

He went on, "And then there was some bratty behavior..."

"You were. You were kind of a bridezilla."

"You were all, this is MY weekend."

(At which point I was immediately all, asshole, it was MY weekend. YOU had your reunion weekend out of town. So you spent the weekend boozing and sleeping in and doing whatever the fuck you wanted ELSEWHERE while I stayed home with the kid.)

But since I'd already gotten 54 kinds of furious about our incident that weekend, thus branding myself as "bratty" I said, "Go on."

He continued, "You all had a great time all weekend. And then it was over and everyone left. And then you crashed."

And this was true. I had a hard week last week. I felt a lack in my world.

(I'd say a disruption in the force, but then you'd know for sure what a dork I am.)

I'd heard about people having the post-wedding crash, where they miss the lead-up and the excitement and anticipation and then they have such a good time! And then there is this void in their lives.

While I loved our wedding like crazy and wanted it to go on and on, this wasn't the case with me.

But post-reunion, I definitely felt like my life was, I don't know, a little less brightly colored. It wasn't Oz vs. Kansas. But somehow slightly diminished.

Realistically, I know that it was a superintense, highly emotional time. We filled Every. Single. Minute. with talk and laughter and drinks and remember when! and hugging and oh!, there is not enough time! Sleep is for when you're dead because we only have a couple days! and wow, I've missed you!

You can't sustain that intensity for very long. I get that. But coming down from it was hard.

And I love my now life. I love my husband and my child beyond reason. I never get enough time with either of them, and I revel in the time we have. I love where we live. I love my friends.

But still, I've realized that there's this little piece of my heart that is missing here.

It doesn't stop me from being happy. I don't generally feel the lack.

In fact, I didn't even realize it was empty, until it was full.

I'm so totally putting on that veil when I get home.
Posted by Lemon Gloria on Tuesday, July 13, 2010

Email ThisBlogThis!Share to TwitterShare to FacebookShare to Pinterest
Labels: friends, high school, marriage, there's something wrong with us, wedding