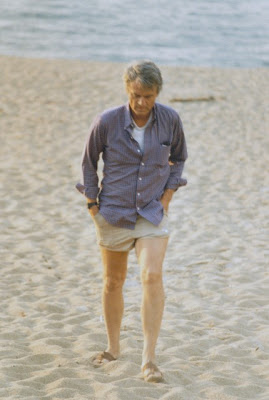 It's now been over a year since we lost you.

I always think it's odd to say lost, since for me it conjures up visions of things misplaced - keys, sunglasses, umbrellas - and sometimes found in random places. Or returned to you by others.

But in my mind, it involves some careless action on one's part, the losing. And we tried very hard not to let you go.

I don't know where this picture was taken - India? Egypt? - but it is so very you. You loved the water, loved the beach. And some piece of you always walked alone.

You were so gregarious, such an extrovert. You loved people. You were so charismatic; people were drawn to you.

You had so many friends, but at core, I think you kept yourself alone.

So it's been over a year since you left.

Nick and Phil brought the sailboat over to DC. It now has an engine that works, as well as a functional navigation system. And they both know how to read nautical maps.

In other words, their journey was a lot longer but a lot safer than when you and Nick brought the damn boat across the bay.

I still think about how lucky you were that the boat didn't catch fire and sink. While you were in the middle of the shipping lane.

I bring up the boat because one of these weekends when it cools down, when it's beautiful out - perhaps early fall - we'll take your ashes out and set them free.

I've been reading a little about scattering ashes. Or cremains - turns out Angel at the funeral home didn't make up that bizarro word.

When I think back to last spring and summer, they just seem surreal.

The aftermath of your death was seemingly endless. It took months for the DC coroner to determine the cause of death. I wanted to scream, "How can it matter? He's dead!" I wanted to stab someone for dragging it out, keeping us from wrapping up the administrative pieces. Keeping us from beginning to heal.

Sometimes I cannot believe we lived through all that.

I know you didn't intend it. But Virginia would've been a lot easier. DC is run by incompetent idiots.

Anyway, Dad. I still miss you so much. There are so many moments where I see Jordan doing new things and I know how much you two would enjoy each other. You would love my boy like crazy.

And you'd be so proud of what we've done with our house. It was terrible when we started, and now it's lovely, or pieces of it, anyway. We have you to thank for it. So, thank you.

I love you and I miss you.