I was going to title this "Man me once..." but that just sounds dirty 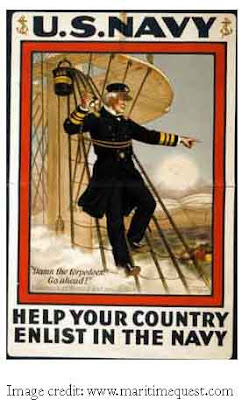 Admiral Farragut is now my buddy for life.

I don't retain facts, even when I try. My emotional memory, or whatever you might call it, however, it spectacular.

Not useful. But very strong.

When something really gets me, I remember it forever. I can still recite 16th century French poetry from classes a lifetime ago. I remember clothing and smells and the look on a face and the tone of a voice from years and years past.

When I'm looking for a passage, I know the location of text on a page, although I might not get the name of the book right.

But give me facts and dates and I am all uh-huhzzzzzzzz. I’ll be left with some vague recollection, but more like how you sweat liquor the day after a long night of drinking.

It’s there, but it’s pretty far from its original form.

So Betty called last night while I was in the shower. She’d gotten lost in the dark on the way to our house. She pulled over somewhere on Connecticut.

As Nick was telling me this (once Betty was safe and sound at our house) I said, “This is so much like when you overhear tourists on cell phones here, and they’re all, ‘I’m at a square. The one with the guy on the horse.’”

(If you don’t live in DC, let me tell you: They all have guys on horses. And tourists say this kind of thing all the time.)

Nick replied, “It wouldn’t be a square. It would be a circle.”

“There are squares. That one near the White House.”

“He’s not? I've walked through there a million times. Of course he is."

This makes me indignant on his behalf. "Isn’t he a big name? He should have a horse. It’s only fair!”

“Except that he was an admiral.”

Long pause for insane laughter. In other circumstances, I'd be embarrassed, but he knows who he married.

“Ahhhh. Not so much on the horses?”

“Not so much on the horses.”

Email ThisBlogThis!Share to TwitterShare to FacebookShare to Pinterest
Labels: blonde moments (for lack of a better term), the Betty