Or maybe it can be attributed to my relentlessly sunny disposition 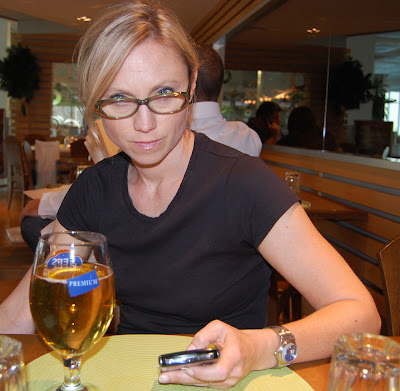 Looking at this photo, I don't remember what Nick had just done to irritate me, but clearly something.

Maybe just taking the picture. We'd been sitting in the Izmir airport, waiting to fly back to Istanbul, for about five hours. And I didn't like my book. Stuck, with no reading material.

But that's not the point. The point is this.

We had dinner with friends the other night, and in the course of conversation, I learned that my friend Sam, who used to read my blog, no longer does. He said he read it daily. Until I got engaged. At which point I got boring.

It is no longer, he is certain, of interest to men.

He's not single, and even when he was, we were never interested in each other. We have always been just friends. But he really liked the angst-ridden single woman stories. No matter that he heard them in person regularly. But after that, he just stopped being entertained.

His contention is that my male readership has surely taken a nosedive. Single? Fascinating. Engaged? Married? Not quite as much.

Of course I want people to like me. I eat up any kind of praise with rapid, greedy bites. So my immediate thought was, what can I change?

I talked about this with two charming men the other night who both said they were in total disagreement with him. But Sam's words stuck.

This has really been gnawing at me. Did I get boring? To men anyway? Very few men comment, but that has always been the case. But maybe even fewer now. I hadn't been paying attention until he said that.

And then I thougth about it. Most men are probably not so interested in reading about ovulation and my MIL and the myriad weird places I'd put my penis if I had one. So is this what happened?

Obviously, it's pointless to say, "If you were a guy who used to read LG, but now you don't, why not?"

And the truth is, all you can do is live forward. I can't write fiction, and blogging about my here and now is what I find most satisfying.

But what I am wondering is this. Are single women more interesting in general? And if so, is it because they're single, and so there's the possibility of dating? Are single, angsty stories just more compelling?

Email ThisBlogThis!Share to TwitterShare to FacebookShare to Pinterest
Labels: blogging