So the inner and outer loop thing - turns out, it's all one road 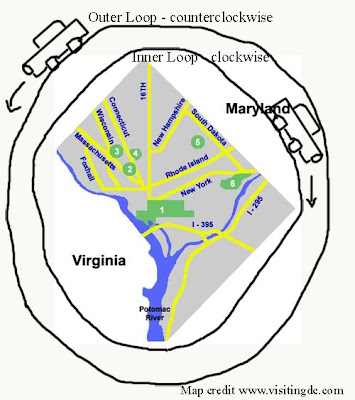 People who don't live in DC or its environs will likely not appreciate this. Unless all cities have a Beltway (or two) - do they?

Anyway. I learned this morning that my understanding of the major routes around DC is much like my tenuous grasp on the rules of baseball.

We awoke to the traffic report on NPR. It was raining. There was an accident on the outer loop. Traffic was jammed.

I turned to Nick. "It's always jammed on the outer loop. And people have to drive from so far already."

"How far out do people who take the outer loop live ?"

"Well, like, we're never on the outer loop. Do we even know anyone who lives way out there?"

"Lis, when we come from your parents, we take the outer loop."

"We do not. They're close to DC. They live inside the beltway. Inside the inner loop, even."

I'm not going to bore you with all the convoluted details of the conversation that ultimately ended in my enlightenment when I can just go ahead and tell you this. In my mind, all these years, the Beltway, it consists of two major one-way roads: The inner loop and the outer loop.

And here's the thing. I have driven on 495. Which turns out to be the Beltway. And still, I didn't get it. I was always nervous about THE Beltway. The idea that you would be stuck going only one way around that whole loop made me twitch.

Plus, I have always wondered why people didn't just take side roads to get on the inner loop when traffic on the outer loop was terrible. Wouldn't that make a lot more sense than just being stuck on the outer loop?

And now that it's been explained to me, I realize it makes about as much sense to have two one-way rings around the city as it does for the home team to get to keep batting till it wins.

Email ThisBlogThis!Share to TwitterShare to FacebookShare to Pinterest
Labels: blonde moments (for lack of a better term), confessions