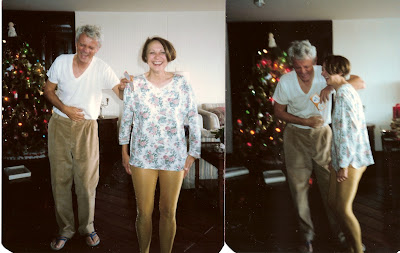 These pictures were taken on Christmas morning about 15 years ago.

I'd given my mom these gold tights (I cannot even begin to remember why), and she put them on immediately. She came back to the living room in them, and we all started to laugh.

As you can see, she and my dad are laughing so hard they're having a hard time standing up.

And this is the thing: we have humor chemistry. We think the same things are funny. My brother, for as angry as he can make me, is truly hilarious.

I always picked friends whose sense of humor worked well with mine. And as such, I didn't give it much thought until I was dating and dating and realized that so many men are not funny.

Although I should say Nick is in utter disagreement with me on this: I contend there are more funny women in the world than men. It's hard to find funny men.

My proof: I have lots of hilarious female friends. But the funny men? Hard to find.

I got started thinking about this after emailing with Dagny yesterday. I realized that I'd made the assumption that her sister has the same subtle, slightly wicked sense of humor she has. I've never met the woman, but I figured, of course she does.

At which point I remembered that actually, Nick is the only funny person in his family. His father and younger sister seem to be able to appreciate our kind of humor, at least some of the time.

But none of them generate anything that make either of us laugh.

He was kind of a funny island unto himself in that family. Till he married me. And now he has someone with whom to snicker in the corner.

So then I started wondering how our kid will come out? I hope he has our sense of humor!

Because what if he turns out to be a Will Ferreller? And just thinks we're un-funny freaks? And we don't think he's funny either?

Because I'm not sure where humor comes from, but it's not all nurture. Maybe a lot of it is nature?
Posted by Lemon Gloria on Wednesday, July 29, 2009