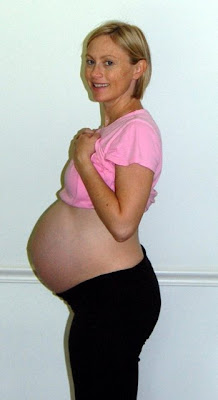 I went in for my appointment last Wednesday.

And in what seemed like a two minute whirlwind the following happened: My OB listened to the heartbeat. He said I have that pregnant woman out-of-breathness.

He did a Group B Strep swab in two orifices. Yikes! Knew about the hoo-ha but wasn't quite prepared for the butt swab!

And then he did the hoo-ha exam and determined that: the boy is head down (yay!!!); I'm not at all dilated; that in all likelihood, I'm weeks from delivery.

How does he know all this so fast?

And then he was all, doing great, see ya next week! Call if your water breaks!

At which point I realized I'd forgotten to ask him if I could drive to Charlottesville for the weekend for Nick's work retreat.

It was a perfunctory question, I thought. The only reason I asked was because Betty made me promise I would.

Because you know my bag was packed for the long weekend of hanging out with fun people at a country club with a spa. I bought a tankini (which I think is a stupid word), and I was all ready to get a preg massage and hang out with cool women and float in a pool and just lounge.

And he said no!

He didn't exactly say no. He said it's too risky, and if my water breaks, he's not having me come back to DC, and I'm stuck delivering in Charlottesville.

My water breaking? I wanted to say dude, they told me the statistics. You really think I'm going to be in that itty-bitty 12%? Nearly four weeks ahead of my due date?

But instead, I said OK, I'd take the route of caution.

Although I will admit to you that my first thought was this: Lie! Lie to Betty!

Lie to Betty, lie to your OB, and go have fun for the weekend!

Then I realized that it's not actually about me, nor is it about Betty. It's about the boy.

And I'm not only a liar but a giant asshole if something does happen. Even though odds are slim.

I called Nick, sobbing. "Why? Why is everything so hard? Why don't I get to go? How come I never get to have any fuuuuuun?"

But as it turns out I do get to have some fuuuuun. I'd already taken today off, so today is a lounge with Betty day.

I slept late. We're going to Upscale Resale shortly. And, as fabulous Jen is briefly back from Macedonia, and we are having dinner tonight. She is engaged, and we have a treeeemendous amount of catching up to do.

And Nick is coming back this evening, and we have all kinds of nice things lined up for tomorrow.

But you know the boy is just going to hang out in his little pool, and that water is not going anywhere for the next several weeks.

Ah, well. Better safe than sorry. Never my prior motto, but not a bad one.