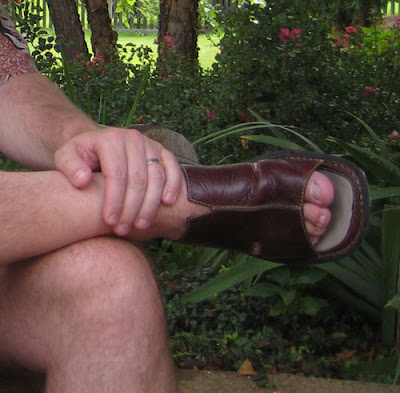 I don't know how you feel about sandals on men.

It might be because I grew up in places where men wore sandals. I dunno. I just like them better than flip flops. And I certainly wear sandals as much as possible when it's warm; I don't see why men shouldn't either.

So we got Nick this pair of mandals at DSW.

He was never a man for sandals, but I was tired of him wearing his horrible old faded flip flops all the time. So I proposed these, and he likes them.

Also, because the disembodied foot above quite amuses me, but is admittedly kind of weird, here's the rest of the picture. I like how we're both all floral-y. 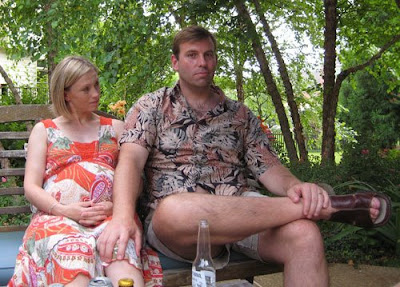 And I know we look grumpy, but we're not. And the pictures where we're smiling are totally blurry.

Nick wore them while with his colleagues in California a couple weeks ago, and one of them commented on his footwear. Because the mandals, they are such a departure for him.

He told them I'd chosen them. What did they think?

The guy said, "I think that's an excellent way for Lisa to make sure that there's no chance that any other woman would be attracted to you while you're apart."

Nick relayed this to me, and all I could think was, seriously, dude? Out of all his gem clothing possibilities, you're going to focus on the mandals?

Why not his seersucker shorts? How about that damn Itchy and Scratchy t-shirt that I just bet he took on that trip with him?

Both of which make me want to rip his clothes off. Not lustfully.