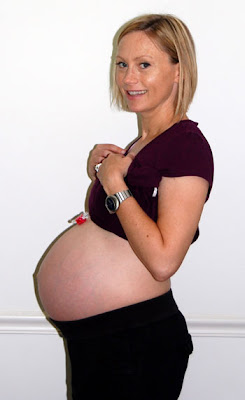 Oh, hi. I missed you guys, even though I'm the one who wasn't around.

I had all good intentions of getting this up on Friday.

Betty took the picture and I was going to post, and then Nick called to say his plane had landed early, and I rushed off to Dulles and then we went on with one thing and another - some fun, but mainly 85 different house-related errands and tasks. And the blogging, it didn't happen.

And now it's Monday. How is it that five days can take for-fucking-ev-ver and three can go by so fast?

So (in case you're wondering about the sweetie above) I've started to see what I can balance on my tummy. Which, although it's reached astounding proportions, is still not a lot when I'm standing up.

I'm working on it, though. I'll keep you updated.

Last week I learned from the cardiologist that I'm normal. All my little heart racing episodes fall in the range of normal. The lightheaded, they chalk up to pregnancy. Normal.

This was no surprise to my OB. He always looks all my numbers and tells me I'm fine. Keep it up; you're doing great!

This past week, I asked about the size and direction of the kid. Do I get another sonogram?

Not unless the internal exam next time indicates that he's breech.

"My husband is gigantic. And he comes from enormous people."

"You're not measuring large so far."

And in the meantime, I've been told by all the women in Nick's family - and somewhat gleefully, I might add - that he weighed 10 and 1/2 pounds when he was born.

But my OB, he looks at my blood pressure and weight and urine sugar or whatever and then listens to the boy's heartbeat and does the tape measure on the belly and then sends me on my way.

So my average size cantaloupe (whose testicles descend this week), he feels enormous. He fills up all of my space, and makes it difficult to get up and sit down and lie down and every other damn thing.

Sometimes I wake up and my stomach looks square, with all the angles he's poking out. I imagine him in lotus position.

He squishes my diaphragm, squeezes my air out, he dances when I'm trying to sleep, and pokes me in the bladder, thus propelling me out of bed and hobbling to the bathroom.