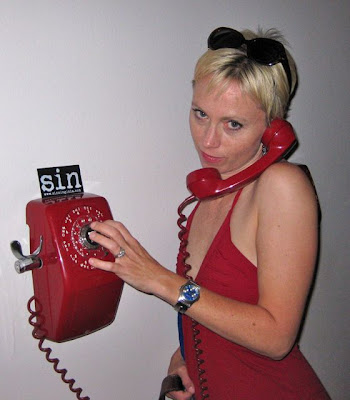 Yes, I do recognize that this will not help my reputation one tiny bit.

Also, Jane took this at the Standard in LA. Do you know how badly I now want a Batphone to Sin?

You know when someone says something clever and then you think really fast to be all, "Oh, yeah? Well, witty come-back to you, too!"

Sometimes this works out better than others.

We're watching the first season of Six Feet Under. Nick had never seen it.

Me, I watched all of the seasons with my parents several years ago. I'd sometimes stay over on Saturday nights and Betty and I would watch one and then another and another, until it was 4 am and we were both devastated and practically comatose.

You know I have friends with breast implants, and while I have no actual desire for fake boobs, I've given the idea some thought. In other words, I know my stand.

When we got in bed I said, "If I ever get fake boobs, I'm getting small ones."

"Where did this come from?"

Nick was silent for a moment, and then he got this big smile. I figured he was thinking about the breast implants.

"You want to hear mine?"

"Hilarious. How long have you been waiting to use that?"

And so I started thinking, fast. Because who wants to be outdone on this sort of thing?

"What? You started it. Girth Brooks?"

Email ThisBlogThis!Share to TwitterShare to FacebookShare to Pinterest
Labels: boobs, marriage, there's something wrong with us