Mammaries, all alone in the moonlight 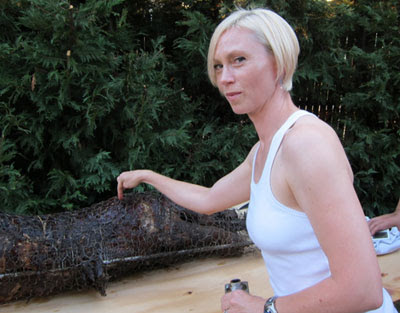 So last week at the crack of dawn, and through no action of my own, I got my ornamental little cupcakes back.

Maybe you are wondering what the hell this has to do with the roast pig. And what cupcakes?

You know how I'd been going on and on about how Jordan got teeth and I was going to cut him off and that was that and I want my body back and la la la la la?

The truth is, he cut back. Once he started really moving, the idea of sitting still long enough to nurse was just unbearable for him.

You can chase a kid around with a bottle. Not so much with your boobs.

So daytime nursings on my days off went out the window. He was still cool with it first thing in the morning and before he went to bed. Which were the best snuggle times anyway.

And then he just stopped being into the nighttime boobfest.

We were down to first thing in the morning. Which was very convenient, because you can still be mostly asleep at 5 am with the nursing. The staggering downstairs to make a bottle? Much more awakey, I've discovered.

And then last week, last week he was just like, "Yeah, no thanks. But what are those? I've never really taken a good look!" Flick! Flick! "And now I think I'll try to twist them like little pink radio dials."

Which was when Mama put them away for good. I knew we were really done.

So here's how the pig figures in. In case you actually want to know.

Have you ever given any thought to the term "suckling pig"?

And then one day I looked down at my little boy, and I thought, holy crap! Suckling pig! Is a pig who is still nursing! And they pull him away from his pigmama and conk him over the head (I think) and stick him on a spit and everyone is all, oh, tender!

I asked one of my friends at the pig roast who said yes, absolutely! Suckling pig is the veal of pork!

Email ThisBlogThis!Share to TwitterShare to FacebookShare to Pinterest
Labels: boobs, breastfeeding, the boy