The mantra rug, jeans babies, and the busy business of mamama eeeeee thump up! down! bang blam here! there! blam! In other words: send liquor.

I'm going to start by reminding you how much I love my son. 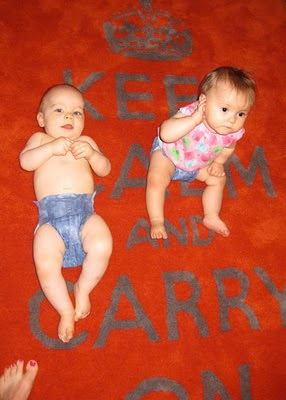 Also, I put this rug in his room. For me.

But you know I love him more than my life, right? And that I would do anything for him?

Plus, on the whole he is happy and smiley and sweet and charming and he makes me laugh and I squeeze on him and kiss him approximately 956 times a day.

So when I tell you that lately in addition to all that, he's being kind of an asshole and driving me up the fucking wall, I trust you'll understand that I realize he's a baby and not an asshole and I'm not actually resorting to baby window tossing or giving away and you won't call Child Protective Services.

Also please forgive any possible run-on sentences. I'm tired and cranky and did I mention tired and that my kid is kind of pushing me to the frazzled ends of my little rope?

So I am never around babies, because: 1. I avoided most of them like the plague before I had one, and 2. I generally suck at organizing play dates.

And since I love to generalize, I just assume most babies are probably like mine. No?

My friend Karen came over last Friday with her daughter Summer, who is six weeks older than J. I don't know if you gender differences play a role, but I was really struck by how much calmer and gentler her daughter is.

We celebrated managing to get together with tea and Jeans Diaper Dance Party 2010.

While Karen changed her, Summer kicked back and was all, "Cool, a dry diaper! Thanks, mom!"

She made some kind of adorable little cooing noise.

Whereas Jordan did his typical clutching at the side rails for dear life and wailing and flailing and generally behaving as if the changing pad is covered in acid and nooooo not another toy to hold and please God, please grant him the dexterity to scale the wall and escape.

Finally I got the diaper on and put him on the floor and he was all, "Awesome! Now Summer, let me show you these amazing drawer pulls. One day I'll be strong enough to pull and the contents of the drawer will be MINE! To strew about! Mhahahahahaha!" 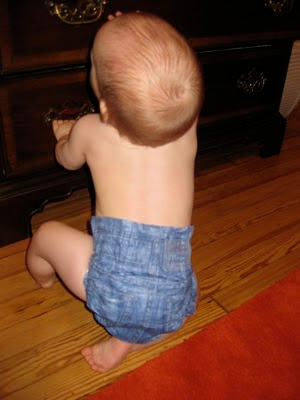 Summer sat on the carpet near her mom and watched. While J bounced off every single wall we have and pulled out all his toys and generally caused as much chaos as possible.

And then she stood up and raised her little arms so her mom would pick her up.

While J raised his arms for up, and then as soon as I picked him up he was all nooooo fllooooor is so much more interesting and down down is where I want to be!

Because you see when he is down UP! Up is where he wants except he'd also like to be THERE! Until he is THERE and then here - wherever here is - is far preferable.

(Also the extra !s are for emphasis and I don't actually speak Xhosa. Although I do think it would be really cool to speak a click language.)

All the while I'm eying Summer, who is making cute noises and gently picking up one toy after another and examining and playing quietly. And watching politely while my little hurricane is grabbing toys, pounding the floor, and being all bang! Blam! Bang! This one goes to eleven!

In this picture we're at the end of our date. You can see Summer is kind of like, "Oh, thank you so much for having us over. I've enjoyed it immensely and your son has a certain charm and now I'm tired."

While my little rocket scientist is all, "I can't believe you're interrupting my BANG THUMP busy business for a picture! Don't you know how many more bells and whistles and BAM BANG BANG THUMP I need to demonstrate before they leave?" 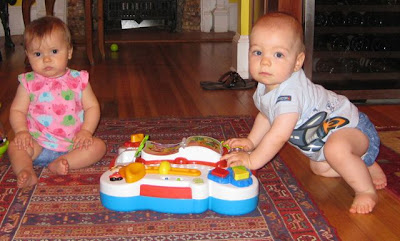 Email ThisBlogThis!Share to TwitterShare to FacebookShare to Pinterest
Labels: love and happiness, rant, the boy